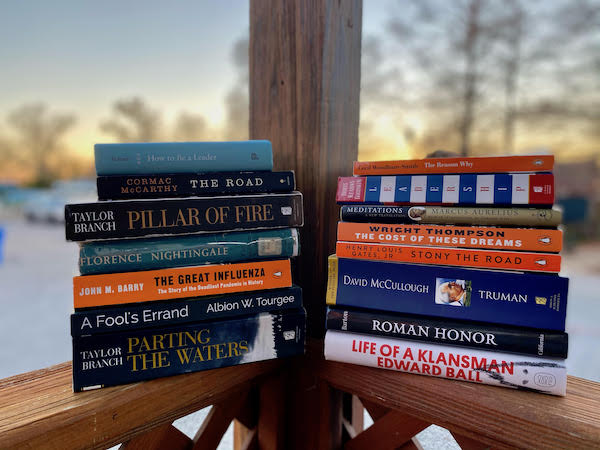 We are doing a 2021 New Year New You Challenge. Please join us!

Man. What a year.

There’s not much you can say about 2020 that doesn’t include some curse words, but I will say this: It provided plenty of time for reading. It provided plenty of things that needed to be read about—from leadership to pandemics to civil rights to elections—this was one of those years that sends you to… well, I would say “the bookstore,” but that was hard, too.

My reading list is now ~250,000 people, which means I hear pretty quickly when a recommendation has landed well. I promise you—you can’t go wrong with any of these.

The Great Influenza: The Story of the Deadliest Pandemic in History by John M. Barry

There is something surreal about reading a book published 15 years ago about an event 100 years ago that just happens to nail exactly what’s happening in this moment (his book Rising Tide: The Great Mississippi Flood of 1927 and How it Changed America is also good and equally timeless.) Barry’s haunting book covers in definitive, gripping detail the Spanish flu: a global pandemic which staggered nations and cities and the brightest medical minds of the time. “It’s only the influenza,” confident officials repeated. “It’ll be over soon,” they reassured. And then the President of the United States caught it… (I’m talking about Woodrow Wilson, of course). Because the more things change, the more they stay the time. Because history is the same song happening on repeat. Anyway, reading this book at the beginning of the pandemic was not only educational, but it has helped shape my family and businesses’ responses to the crisis. Barry writes of the relief people felt when the Spanish flu seemed to be winding down. They thought it was over, but actually only the first wave was done. “For the virus had not disappeared. It had only gone underground, like a forest fire left burning in the roots, swarming and mutating, adapting, honing itself, watching and waiting, waiting to burst into flame.” You cannot relax yet. You cannot drop your shield, as the Spartans would say. You must continue to protect the line. The health of your neighbors depends on it. And I joked in February that I was deliberately not going to read The Road by Cormac McCarthy this book because of the pandemic. In truth, I got it down from my shelf and sat on my bedside table while I worked up the courage to read it again. My feelings were well-founded, because on the night I finished, all I could do was walk quietly into my son’s room and sob while he slept. The Road is just one of the most beautiful and profound depictions of struggle and sacrifice and love ever put down on the page. Worth reading again!

This is an absolutely incredible book. I think I marked up nearly every page. The book is a study of Abraham Lincoln, Theodore Roosevelt, FDR and Lyndon Johnson, and it is so clearly the culmination of a lifetime of research… and yet somehow not overwhelming or boring. Distillation at its best! I have read extensively on each of those figures and I got a ton out of it. Even stuff I already knew, I benefited from Goodwin’s perspective. This is the perfect book to read right now—a timely reminder that leadership matters. Or as the Stoics say: character is fate. Or as I wrote about in this piece about leadership during the plague in ancient Rome: when things break down, good leaders have to stand up. After Goodwin, I picked up Leadership in War: Essential Lessons from Those Who Made History by Andrew Roberts, who I find to be funny, insightful and quite good at capturing the essence of unique historical figures. I also recommend Roberts’ biographies of Churchill and Napoleon (you can listen to my interview with Roberts here). As I said, now is the time to get perspective and to learn from the past.

Parting the Waters: America in the King Years 1954-63 by Taylor Branch

I’ve raved about some of my favorite epic biographies before: Robert Caro’s LBJ, William Manchester’s Churchill, Gibbon’s Decline and Fall, Well, add another to the list. Taylor Branch’s definitive series on Martin Luther King Jr. and the American civil rights movement has not only been riveting, eye-opening and humbling, it’s been the perfect vehicle to help me understand what’s happening in the world right now. I finished Parting the Waters and immediately picked up Volume II, Pillar of Fire. I’ve come to believe that one of the best ways to become an informed citizen in the present is not to watch the news, but to read history. The actor Hugh Jackman said in an interview a few months ago that he’s been getting his news by keeping his eye on the big picture—going through the Ken Burns catalog and reading books like Meditations. “That’s the way you should understand events and humanity,” he said, “with that sort of 30,000-foot view.” If you want to understand what’s happening in the United States right now as it pertains to race, get off Twitter and read these books. On that note, I re-read Invisible Man, first published in 1952, in light of the killings of Ahmaud Arbery, Breonna Taylor and George Floyd. There are many “anti-racist” reading lists floating around, but how many of the books on those lists will still be readable in 70 years? Do yourself a favor and read this. It’s not going anywhere because it is timeless—and sadly, very timely. I also learned so much from Edward Ball’s Life of a Klansman (and when I interviewed him) and just as much from Albion W. Tourgee’s A Fool’s Errand (Albion was one of the legal advisors in Plessy v. Ferguson). Strongly recommend one or both of these books to anyone who wants to become better informed instead of more partisan. My study of this history has been ongoing, but I feel I have learned far more these books than I have from the trendy white fragility books going around. Also if you’re interested, here’s a step I have taken in regards to Confederate monuments (that is: literal white supremacy monuments, as you’ll learn in these books and some of my interviews on the topic) in my town.

I really can’t leave it at just three books. I loved Cecil Woodham Smith’s books, Florence Nightingale and The Reason Why: The Story of the Fatal Charge of the Light Brigade. I loved Julian Jackson’s biography of de Gaulle and McCullough’s biography of Truman. I loved even more Wright Thompson’s The Cost of These Dreams. The best thing I read about writing was Steinbeck’s Journal of a Novel. The best two bits of philosophy I read were Plutarch’s How to Be a Leader and Carlin Barton’s Roman Honor: The Fire in the Bones (an expensive primer on the Stoics, really—but very good). As far as kid’s books goes, we read The Scarecrow together many times. Every night we read A Poem for Every Night of the Year (edited by Esiri Allie). We’ve also done several tours through the stories in Fifty Famous Stories Retold by James Baldwin. Finally, I spent a lot of time with Marcus Aurelius during the pandemic… because he himself lived through one. The big thing I took away, which pertains to so much of what’s in these books: “You can commit injustice by doing nothing. “Be free of passion but full of love.” “No, it’s not unfortunate that this happened, it’s fortunate that it happened to me.”

Of course, I also put out a book this year, Lives of the Stoics, which debuted at #1. I also released a box set of The Obstacle Is the Way, Ego Is the Enemy and Stillness Is the Key. You can get them anywhere books are sold OR we have signed, personalized editions in the Daily Stoic store. They make great gifts!

But most importantly, I hope you join me in the Daily Stoic New Year, New You Challenge.

New Year, New You is a set of 21 actionable challenges—presented one per day—built around the best, most timeless wisdom in Stoic philosophy. Each challenge is specifically designed to help you:

21 challenges designed to set up potentially life-changing habits for 2021 and beyond.

There are over 30,000 words of exclusive content that I don’t post anywhere else. Each day also has an audio companion from me, weekly group Zoom calls, a Slack channel for accountability, and a lot more. It’s one of my favorite things I do each year and really enjoy interacting with everyone in the challenge. Click here to learn more.