This Is the Real Virus to Fear

I found out a few days ago that a friend caught the virus.

I was worried. I felt sorry for them. I was also frustrated. Because it wasn’t COVID they had been infected with, but a different virus related to it: the virus of conspiracy.

Its symptoms presented almost immediately. Along with delusions were the corresponding symptoms of callousness and selfishness and deliberate ignorance.

This was a smart person. A good person!

But here they were, telling me suddenly about their doubts on the efficacy of masks and sending me links to some discredited COVID denier. Over the coming weeks, I would watch them become increasingly radicalized and disconnected from reality; a process that while thankfully not nearly as deadly as COVID, was equally merciless and unstoppable.

This idea that there are other forms of contagion to be worried about during a pandemic is, unfortunately, not a new one. Two thousand years ago, Marcus Aurelius, in the middle of the Antonine Plague, would say that “an infected mind is a far more dangerous pestilence than any plague. One only threatens your life, the other destroys your character.”

It strikes me that the last several months have revealed a few different forms of mental infections.

The first, of course, is conspiracy theories. When we are overwhelmed, hurt, and scared, we tend to grasp for something, anything, that explains the unexplainable. There is a simplicity to the idea that the pandemic is really a hoax, or that 9/11 was an inside job. Somehow it’s actually less scary to believe that it’s all made up, or that your own government is out to get you, than it is to grapple with the idea that they fell down on the job. A world with a cabal of child traffickers operating in plain sight is somehow actually less terrifying than a world of senselessness and chaos and horrible things that happen for no reason.

Are there such things as real conspiracies in the world? Of course. I wrote a book about an actual one! But I love the meme designed around a cartoon from the great Hugh MacLeod: 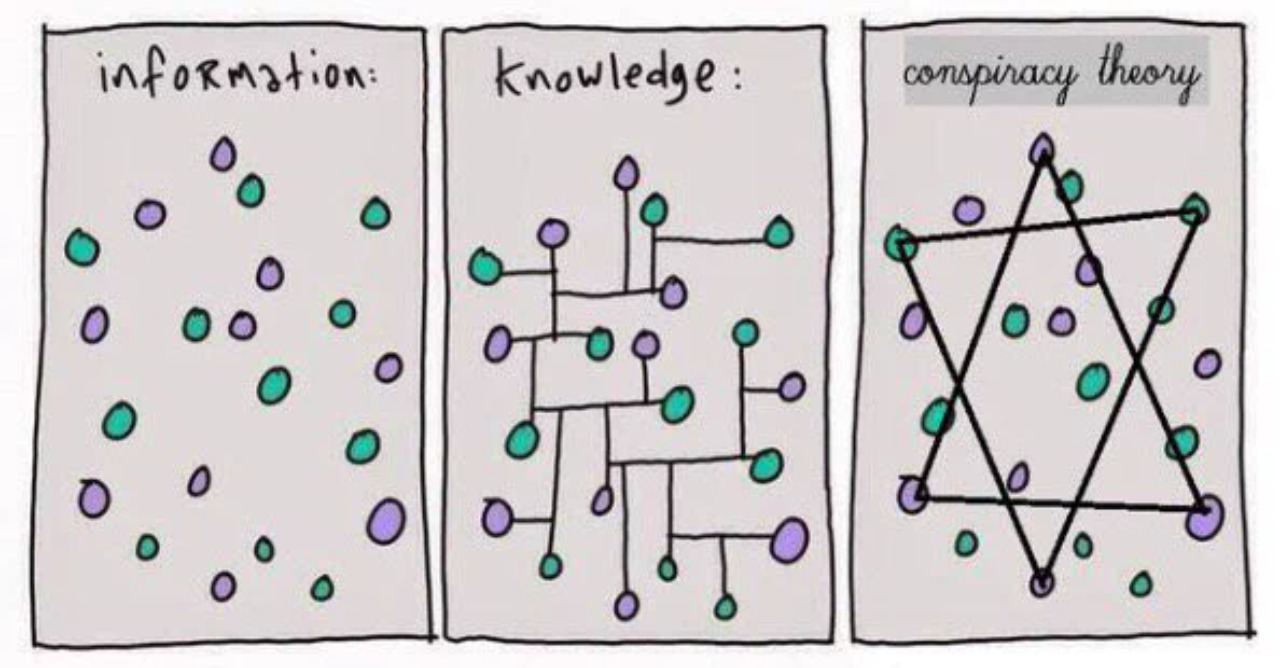 Another common virus is the virus of radicalization. It is this insidious process, initiated by some foreign outside influence, by which we’re drawn into an increasingly opaque world of ideas—one video, one book, one sermon after another. It starts small, a couple of tweets here and there. But then they converge, like cells forming a tumor, and before you know it that tumor is cancer and it’s metastasizing. It’s attacking our body. It’s using our own brain against us. Suddenly, the information that contradicts what we’ve picked up is confirmation of it. They say sunlight is the best disinfectant, but now if you see the sun is shining it’s only proof that the darkness is everywhere.

And so one conspiracy theory leads to another and another and the next thing you know, you’re a raving asshole at best, or worse, a dangerous lunatic.

The irony should not escape us: In the early 2000s, after the heinous attacks of September 11th, the radicalization of young men and women by their exposure to extremist Islamic views became a major topic of discussion at Senate subcommittee hearings and on cable news roundtables. Today, radicalization has come home—brought ashore by our own technologies and media—and it’s just as close-minded, extreme, and violent.

It’s also created people who are totally unreachable. That is how powerful cognitive dissonance can be—impervious to reason, to evidence, to moderation, to critics, to friends and family to get back to the real you. What started as a question or two becomes an elaborate universe, a false reality we inhabit. Some people end up so brainfucked, it’s likely we’ll never get them back.

The problem with conspiracy theories and their radicalizing effect is how related they are to another infection—in fact, they are often comorbid with each other. I’m talking about the infection of cruelty and callousness.

The cancer starts intellectually, but it does its real damage emotionally…

One would think that people who believe that COVID-19 was a biological weapon unleashed upon us by the Chinese would then be taking the risks very seriously, but somehow it’s the opposite: these are also the anti-maskers. (“But it’s uncomfortable!” “But I’m in good shape, why do I have to be inconvenienced?!” “You can’t make me!!!”) These are also the people trying to squint at the numbers to explain away the death toll. These are the ones saying, “Oh, but a lot of these people would have died anyway. They were old, you know.”

Just open everything back up, they say, let the virus run its course…a course that will include many more freezer trucks full of bodies, that will include the preventable losses of so many loved ones. It’s insidious how the virus works, no matter the situation. Show somebody a video of a black man being gunned down in the street and instead of the normal, human reaction of pain and compassion, the mind now plugs in reasons they don’t have to care. What about black-on-black crime? Blue Lives Matter too! But did he have a criminal record?!

It’s the certainty. It’s the closed-offness. Just as COVID can take away your ability to taste or smell, others among us lose their ability to feel.

When Marcus Aurelius was talking about destroying your character, this is what he was talking about. To me, the people ranting at city council meetings, screaming at cashiers, or making up fake doctor’s notes to get out of wearing a mask seem far sicker to me than most of the people I know who have caught the virus. I have a friend whose husband, being overheard expressing some caution about COVID, had his face licked by a colleague who believed the whole thing to be a hoax. You know who does that? A sick person. A person who has not only been infected in a way that has made them deranged, but whose insecurity about that has turned them into a bully.

That was the saddest thing about hearing that my friend had suddenly become an anti-masker. This is a good person. A decent Christian who has always been generous, kind, respectful. Yet they had picked up some beliefs—been corrupted—by something that now violates the most essential teaching in their religion: the commandment to love our neighbors. To love them as we love ourselves. To protect the sick and vulnerable and the meek.

Do not think you are exempt or immune from this corrupting virus. If ordinary people living on the same block as you can be radicalized by falling down internet rabbit holes, if the toxic media (and social media) culture we’re in can nurture and feed unfathomably dark and awful views, then what do you think it’s doing to you? Do you think you yourself might be getting radicalized by your own filter bubble? Are you doing a good enough job holding up every impression and opinion to be tested? Or are you, too, in a less dangerous way, being swept up in the passions of the crowd, however fringe or alt or mainstream that crowd may be?

Radicalization is the scourge of our time. Ordinary people who share an enormous amount in common are being turned against each other. People who are polite and friendly and would help a stranger change a tire on a rainy night on the side of the road are being turned into weapons in a war that helps no one but advertisers and trolls and power-hungry populists.

Of course, most of us are smart enough or emotionally stable enough that we can’t be deceived by the most absurd propagandists. There’s no spiritual hole in us, so we can’t be manipulated by an Alex Jones or whomever, right? Good. But there is another mental virus out there—one that the pandemic has brought out in otherwise smart and rational people.

This will all be over soon, we convince ourselves. This one thing will solve all our problems. Our ex is going to walk through the door any minute now. The pandemic will just disappear because we want it to. This kind of thinking makes us feel better, sure, but…that’s just not how it works.

Just ask Chris Christie. He knew he had a lung condition. He knew that testing was not perfect. He knew he should have been wearing a mask at the big White House event. But he told himself, “No, this is a safe space.” Like a lot of people, he probably thought, “This is important, I’ll make an exception.” Or he thought, “I don’t want to deal with the hassle or the awkwardness—I’ll just hope it works out.”

And for Chris Christie and the White House Rose Garden party, we can plug in: “But I really want to see my folks for the holidays.” “It was just a small get together with friends.” “But my kids miss going to school.” “I really want to believe that racism is a thing of the past.”

Well, that’s not how it works.

The last few months have been a great example of the costs that come when magical thinking doesn’t materialize and the chickens come home to roost. When hope is your strategy, you get caught unprepared. When you expect problems to solve themselves, you are disappointed. When you don’t listen to advice because it’s unpleasant or comes with difficult obligations, when you focus on short-term solutions or disregard risks, you’ll find even bad situations can be made worse.

I love this little video: Just because you’re over it, doesn’t mean it’s over yet.

Marcus Aurelius reminds us that we have to see not what the enemy wants us to see, but what is really there. He works through, in Meditations, stripping things of “the legend that encrusts them,” of removing the magical thinking that distorts our picture of the world. You can’t go around expecting Plato’s Republic, he said—the world is harsh, problems are real and no amount of hope makes it otherwise.

We must be on guard.

Not just against COVID-19, but of the other illnesses that its stresses and uncertainty can bring about. What good is surviving the virus—and most people will survive COVID-19, thankfully—if the cost is being a horrible person? If, in so doing, you blatantly rejected your obligations as a human being? If you mocked and dismissed the suffering of the people who are not as fortunate as the rest of us? You think you’re dunking on the other side… really, you’re dunking on yourself.

We can’t deny it, either. Or else we won’t be able to protect ourselves.

Exciting news! We have signed and personalized copies of my books available in the Daily Stoic store. We’ve also got the leatherbound edition of The Daily Stoic back in stock, too. Check out my original trilogy on Stoicism, my latest bestseller Lives of the Stoics, and all the others.