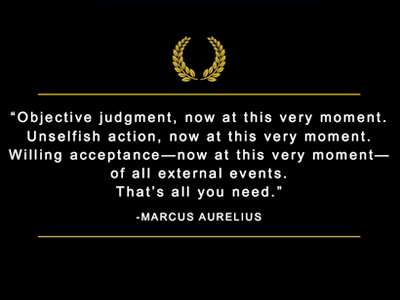 When I was nineteen years old I was told to read a book: Meditations, by the stoic philosopher emperor Marcus Aurelius.

Of course, I didn’t fully understand it at the time, again I was a teenager, but I immediately tore the book apart and made a million notes on it. It was for me, what the economist Tyler Cowen calls a “Quake Book.” It shook my entire (albeit limited) world view.

Though this book changed my life, it was really a single passage inside that book that made the difference. It’s a passage that has struck and changed the lives of many people in the two thousand years since it’s been written. One I’ve turned to again and again–when I dropped out of school, when I had problems at work, problems in my relationships, problem with employees, and just normal life.

“Our actions may be impeded…but there can be no impeding our intentions or dispositions. Because we can accommodate and adapt. The mind adapts and converts to its own purposes the obstacle to our acting.

And then he concluded with powerful words destined for a maxim.

“The impediment to action advances action. What stands in the way becomes the way.”

These words were scrawled by Marcus Aurelius himself, to himself, likely on the battlefront as he lead the Roman Army against barbarian tribes or possibly at the palace amongst the intrigue and pressure. Not exactly a happy or encouraging place to be.

Yet in the years since I first read it, I’ve started to understand is that this little paragraph is the perspective for a special kind of optimism. Stoic optimism.

I’m sure that sounds like an oxymoron, but stoicism gets a bad–and unfair–rap.

What Marcus was writing—reminding himself—is one of the core tenets of Stoicism. What it is prescribing is essentially this: in any and every situation—no matter how bad or seemingly undesirable it is—we have the opportunity to practice a virtue.

An example: I’m writing this article and I hope that it is received well. But it could very easily bomb or get a terrible response. Now this would be a minor but rather undesirable impediment or an obstacle.

That’s probably what I would think at first too. But seen another way it’s…a chance for me to remind myself of humility, or learn from the feedback and improve my writing or even just accept that I can’t please everyone all the time.

Over the years since I first read the book (and in the course of researching my own), I studied people in history who had made this each decision–willingly or by force of circumstance. People who’d faced an obstacle but saw it as the way. Which makes sense because stoicism is ultimately an art that is designed to be practiced, not spoken about.

Take John D. Rockefeller before he was…well John D. Rockefeller as we knew him. He was just a kid with a deadbeat dad. At 16 he took his first job as bookkeeper and aspiring investor.  He was making fifty cents a day. Less than two years later the Panic of 1857 struck. The result was a crippling national depression that lasted for several years.

Here was the greatest market depression in history and it hit Rockefeller just as he was finally getting the hang of things. It’s terrible right? Real investors who supposedly knew what they were doing lost everything.  What is he supposed to do? Rockefeller later said that he was inclined to see the opportunity in every disaster. That’s exactly what he did.

Instead of complaining about this economic upheaval or quitting like his peers, Rockefeller chose to eagerly observe the events that unfolded. He looked at the panic as an opportunity to learn, a baptism in the market.

It was this intense self-discipline and objectivity that allowed Rockefeller to seize advantage from obstacle after obstacle in his life, during the Civil War, and the panics of 1873, 1907, and 1929. Within twenty years of that first crisis, Rockefeller would alone control 90 percent of the oil market. His greedy competitors had perished and his doubters had missed out.

It’s a two part mental shift. First, to see disaster rationally. To not panic, to not make rash decisions. And second, like Rockefeller, we can see opportunity  in every disaster, and transform that negative situation into an education, a skill set, or a fortune.

General Eisenhower—who men sniped behind his back was more of an organizer than a leader—had just pulled off the largest amphibious invasion in military history.

Slow going in the hedgerows of France had allowed the Germans to wage a series of counteroffensives—a final blitzkrieg of some 200,000 men. And now the Nazis threatened to throw them all back to the sea.

The Allies had a pretty understandable reaction: they just about freaked out.

But not Eisenhower. Striding into the conference room at headquarters in Malta, he made an announcement: He’d have no more of this quivering timidity from his deflated generals. “The present situation is to be regarded as opportunity for us and not disaster,” he commanded. “There will be only cheerful faces at this conference table.”

In the surging counteroffensive, Eisenhower was able to see the tactical solution that had been in front of them the entire time: the Nazi strategy carried its own destruction within itself.

Only then were the Allies able to see the opportunity inside the obstacle rather than simply the obstacle that threatened them. Properly seen, as long as the Allies could bend and not break, this attack would send more than fifty thousand Germans rushing headfirst into a net—or a “meat grinder,” as Patton eloquently put it.

Eisenhower’s ability to not be overwhelmed or discouraged by the German Blitzkrieg allowed him to see the weaknesses within it. By defusing his fear of the German counteroffensive he uses his optimistic attitude to find its weakness.

And then there is Thomas Edison. I don’t think that inventing the lightbulb was the craziest thing the guy ever did.

At age sixty-seven, Thomas Edison returned home one evening from another day at the laboratory. After dinner, a man came rushing into his house with urgent news: A fire had broken out at Edison’s research and production campus a few miles away.

Edison calmly but quickly made his way to the fire looking for his son. “Go get your mother and all her friends,” he told his son with childlike excitement. “They’ll never see a fire like this again.” Don’t worry, Edison calmed him. “It’s all right. We’ve just got rid of a lot of rubbish.”

That’s a pretty amazing reaction. It’s what the stoics might refer to as amor fati–loving the things that happen to us.

Edison wasn’t heartbroken, not as he could have and probably should have been.

Instead, the fire invigorated him. As he told a reporter the next day, he wasn’t too old to make a fresh start. “I’ve been through a lot of things like this. It prevents a man from being afflicted with ennui.”

Within about three weeks, the factory was partially back up and running. Within a month, its men were working two shifts a day churning out new products the world had never seen. Despite a loss of almost $1 million dollars (more than $23 million in today’s dollars), Edison would marshal enough energy to make nearly $10 million dollars in revenue that year ($200-plus million today).

So…how can we cultivate this fortitude and ingenuity?

The answer, I say, is with philosophy–practical philosophy. With Stoic optimism, we can be Edison, our factory on fire, not bemoaning our fate but enjoying the spectacular scene. And then starting the recovery effort the very next day—roaring back soon enough.

How about a business decision that turned out to be a mistake? It was a hypothesis that turned out to be wrong, like a scientist you can learn from it and use it for your next experiment. Or that computer glitch that erased all your work? You will now be twice as good at it since you will do it again, this time more prepared.

Perhaps you were injured recently and are stuck in bed recovering. Now you have the time to start your blog or the screenplay you’ve been meaning to write. Maybe you’ve recently lost your job. Now you can teach yourself the skills to get the job you’ve always wanted. You can take a careless employee’s mistake that cost you business and turn it into a chance to teach a lesson that can only be learned from experience. When people question our abilities that means we can exceed their lowered expectations of us that much quicker.

Easier said than done, of course.

In each of the three situations above, the individuals faced real and potentially life-threatening adversity. But instead of despairing at the horrific situation—economic panic, being overrun by the enemy, a catastrophic fire—these men were actually optimistic. You could almost say they were happy about it.

Why? Because it was an opportunity for a different kind of excellence. As Laura Ingalls Wilder put it: “There is good in everything, if only we look for it.”

I’m not Eisenhower. You’re not Rockefeller. Our factory has never burned down, so we don’t know how we would react.

But I don’t think it’s as super-human as it seems at first glance. Because there is a method and a framework for understanding, appreciating, and acting upon the obstacles life throws at us. Like Rockefeller too we can perceive events rationally and find the fortune in downturns. Like Eisenhower, we can disengage from our fears and see the opportunity inside our obstacles. Like Edison we can choose to be energized by the unexpected circumstances we find ourselves in. We know it won’t be easy but we are prepared to give it everything we have regardless.

In our daily lives we forget that the things that seem to be blocking us are small and that the obstacles blocking us are actually providing us answers for where to go next. It’s a timeless formula that can be revisited again and again.

All I can say is that this attitude is something I try to think of always. I try to envision these people facing much more significant problems than me, and seeing it not only as not bad but as an opportunity.

We all face tough situations on a regular basis. But behind the circumstances and events that provoke an immediate negative reaction is something good—some exposed benefit that we can seize mentally and then act upon.We blame outside forces or other people and we write ourselves off as failures or our goals as impossible. But there is only one thing we really control: our attitude and approach

Which is why the stoics say that what blocks the path is the path. That what seems to impede action can actually advance it. And that everything is a chance to practice some virtue or something different than originally intended. And you never know what good will come of that.

The obstacle is the way.

For more on Stoicism visit The Daily Stoic.
Tweet
November 2, 2015by Ryan Holiday

« Previous post
Practice The Stoic Art of Negative Visualization
Next post »
Texas Forever: How I Found the American Dream in the Lone Star State