Believing In Yourself is Overrated. This is Better.

“If I don’t believe in myself, who will?”

A seductive one. An empowering but innocuous phrase has been inscribed on a million inspirational quote images, been the subject of countless self-help books and TED Talks.

Believe in yourself! Fake it until you make it!

The problem is that it’s bullshit.

A few years ago, an interviewer asked Jay Z about his incredible self-assuredness. It’s a good question. He does seem like a person with unending faith in himself. How else could he rap the things that he raps? How else could he have gone from the Marcy Projects to Madison Square? (Great book on this by the way, Empire State of Mind by Zack O’Malley Greenburg)

On a regular basis, I get emails from people who are trying to do big things. They are convinced they have some multi-billion dollar idea, a genius pitch, some brilliant artistic concept. They also have complete certainty that it will be a success (“I just need you for the marketing”). It’s always fascinating to see what this certainty is based on, because it almost always turns out to be, well, nothing. Mostly just wishful thinking, that idea that they can manifest this into being.

They think their success is written in cursive, when really, success and confidence are carved from effort and results. In gradual relief as the evidence comes in, reassessed at every turn. And while it’s perfectly possible that believers may turn out to be right, it’s the latter type, the evidence-based community, as the saying goes, who will enjoy their success more and find it considerably less precarious and fleeting.

This plays out well on the basketball court. Based on what they’ve done in practice, based on their stats, players have a sense of the probabilities of given shots. When Damian Lillard took that 37-foot shot in Paul George’s face to knock the Thunder out of the playoffs in 2019, it wasn’t about belief. He knew he shot 43% from that spot on the floor. Steph Curry knows he’s in range just about anywhere inside of half court. It’s not arrogant when he takes those shots, it’s based on the numbers…but it took years of play and deliberate practice for those numbers to exist. Like Jay Z, they put in the work.

The great military strategist B.H. Liddell Hart compared two different types of generals. The first was the Napoleon types—those who believe they are destined for greatness, who have an unswerving faith in their own specialness and importance. The second, someone like William Tecumseh Sherman, he says, is defined by a “slow growth dependent on actual achievement.” Which is happier? Which is better? I won’t make a joke about how the Napoleons and the Pattons of the world inevitably overreach and are often the source of their own disasters. Hart’s analysis makes a better argument:

To the men of the last type their own success is a constant surprise, and its fruits the more delicious, yet to be tested cautiously with a haunting sense of doubt whether it is not all a dream. In that doubt lies true modesty, not the sham of insincere self-depreciation but the modesty of “moderation,” in the Greek sense. It is poise, not pose.

When I left what was a very good job to write my first book, I didn’t believe I could do it. That would have been absurd. What would that belief have been based on? I had never done it before. What I did have was evidence of the traits necessary for success. I had put in the training as a research assistant on other books. I had written on a regular basis for many years (every day for six years in fact). I knew I wasn’t a quitter. I knew I had mentors I could go to for advice when I felt in over my head.

Same goes for when I opened my bookstore. Plenty of people told me it was a bad idea, but, it wasn’t my belief in myself that motivated me to push past this. I listened to them. I listened carefully. I also looked at the numbers, looked at my track record, looked at the traits I knew I was bringing to the table. I had a case—I had evidence that I could do it and I was willing to test that assumption. No more, no less.

Several times now I have tasted that fruit that Hart was talking about—the sweetness of gradual accomplishment. The immense gratification of looking at something you created and thinking, “Where did that come from?” And being able to answer that it came from you. Not because you were born with it, because you are inherently or intrinsically entitled to it, but because you created it from nothing.

This is a feeling that can only be earned. To take it on credit in advance, to steal it, to pretend, is to miss the point. It deprives you of all the pleasure of the actual accomplishment.

The Bible describes faith as “the assurance of what we hope for and the certainty of what we do not see.” Whatever you want to do with your spiritual life is up to you, but that way of thinking is about as dangerous as it gets when it comes to one’s profession. Hope is not a strategy for writing a book or starting a company. It’s not something to bet your career on.

It is a recipe for potentially catastrophic failure. Cheney believed we would be greeted as liberators in Iraq. Trump believed that being president would be easy. What evidence did they have for these assumptions? Very little. Worse than nothing actually, they had plenty of people telling them how hard it would be, how it would actually go. But they couldn’t listen. They had too much faith, too much belief in themselves, too much certainty in what could not be seen. Instead of tasting the sweet fruit of gradual accomplishment, they drank the bitter brew of abject failure.

You cannot will evidence into existence. If you think you can fake it until you make it, well…that’s just another way to describe fraud.

For the Shermans of the world, their rise was more gradual but it was based on what was real. His famous March to the Sea was military genius but hardly some flash of inspiration. It was the slow accumulation of his deep study of the country, of the failures and difficulties he faced in battle, of his insight into the Southern mind, his collaborations with Grant, and then his willingness to test the theory, city by city, town by town across rebel territory, even as the newspapers called him a madman, an idiot, and predicted his failure. It wasn’t faith in himself, it wasn’t belief that he was chosen by God, it was rational, operational, iterative. And it worked and it saved America.

It also saved himself—he knew when to stop the war, he knew how to end it peacefully, and he knew when it was time for him to walk away. (“I have all the rank I want,” he would say). That’s the other part of it. Somebody believes they can jump off a cliff and live—and if they do survive, that doesn’t mean it was a good idea. It just means they’ll keep doing it until, eventually, they don’t.

Is that what you want? Who do you want to listen to? The gamblers? Or the workers? The hustlers who sell hope as a product? Or the doers who don’t traffic in any of that?

As crazy as it sounds, you don’t need to believe in yourself. That’s not what’s holding you back. Whether you think you can do something is so much less important than whether you actually can or can’t do that thing. You need to assemble a case that proves you can. You need to do the work that stands as evidence for what you’re capable of.

So you can walk by sight, not by faith.

That’s how you actually end up achieving the things that other people are too busy believing they can do. 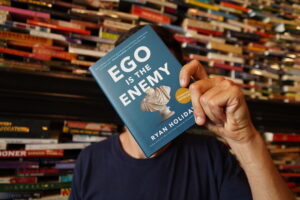 In my book, Ego is the Enemy, I further explore how a delusional belief in oneself poses a threat to one’s goals—whether you’ve achieved some success or hit rock bottom. If you want to be an achiever instead of a believer, I encourage you to check it out. And you can now get copies of Ego over in the Daily Stoic store, where you can also get them signed and personalized!