You Must Stare This Scary Fact in the Face.

If you have ever looked at much ancient or medieval art, you’ll notice something:

The French painter Philippe de Champaigne’s famous “Still Life with a Skull,” which shows the three essentials of existence—the tulip (life), the skull (death), and the hourglass (time).

The beautiful anonymous German engraving from 1635 that features a standing, smiling skeleton aiming a crossbow.

The towering wall of hundreds of smiling skulls unearthed at the ruins of the Great Temple in the Aztec capital.

The famous cadaver tombs of Europe.

The plastered Jericho skulls filled with soil and decorated with seashells from some 9,500 years ago.

There’s even a church in Rome made almost entirely out of the bones of the dead priests that have worked there over the centuries.

And this is a trend that has continued up through the modern era. One of Vincent van Gogh’s earliest works is “Skull of a Skeleton with Burning Cigarette.” There is even an early—though mostly forgotten—Walt Disney cartoon called “Silly Symphony” which is five minutes of dancing skeletons doing also sorts of funny but macabre things. And in 2007, an artist in Richmond, Virginia named Noah Scalin who spent an entire year making a “skull-a-day” out of anything he could get his hands on.

Why is death so common in art?

It’s because death is common in life. And it was once even more common.

Take someone like Marcus Aurelius. His father died when he was just a boy. His grandparents shortly after. He lost his adopted father and cherished mentor. Of his children, eight died before he did. His 15-year reign was flooded with wars abroad and plagues at home.

Even his last words. In 180 CE, having led Rome through the worst of the Antonine Plague, which killed more than 10 million people, Marcus began to show symptoms of the disease. By his doctors’ diagnosis, he had only a few days to live. He sent for his five most-trusted friends to plan for his succession and to ensure a peaceful transition of power. Bereft with grief, these advisors were almost too pained to focus. “Marcus reproached them for taking such an unphilosophical attitude,” biographer Frank McLynn writes. “They should instead be thinking about the implications of the Antonine plague and pondering death in general.”

“Weep not for me,” began Marcus’s famous last words, “think rather of the pestilence and the deaths of so many others.”

Memento Mori. Remember we are mortal. 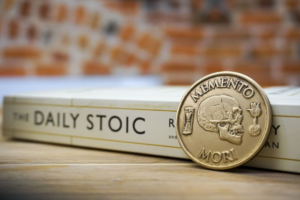 It’s a constant theme in art because it’s a fact that’s as easy to forget as it is scary to think about. It’s unpleasant. And besides… given all our modern advancements in technology, isn’t it a little fatalistic? Isn’t there a chance we may live forever?

There’s nothing quite like a global pandemic to wake us up from our silly fantasies.

Less than two months after the Chair of the 7th District of the New York City Council Health Committee poked fun at the “#coronavirus scare,” the now sobered Mark Levine announced the potential need for temporary graves in public parks. Parks, hospital ships, refrigerated trucks, and other “makeshift morgues” filled faster than the hospitals did and by the end of April, New York City “ran out of space” for its dead.

Maybe we all should have been a little more prepared, a little stronger and tougher… a little less convinced that we had escaped the fate of those that lived long ago.

They certainly tried to warn us, in their writing and by example.

Moses said, “Teach us to number our days, that we may gain a heart of wisdom.” Michelangelo said, “No thought exists in me which death has not carved with his chisel.” The essayist Michel de Montaigne was fond of the ancient Egyptian custom where during times of festivities, a skeleton would be brought out with people cheering “Drink and be merry, for when you’re dead you will look like this.” Shakespeare wrote, “Every third thought should be my grave.” Mozart said, “As death, when we come to consider it closely, is the true goal of our existence.” And Tolstoy said, “If we kept in mind that we will soon inevitably die, our lives would be completely different.”

That’s over 3,000 years of wisdom on the same theme… a theme which predated and continued long after each of them… and will continue after us as well.

For most of history, memento mori was more than “art,” it was a practice. Desks were staged with skulls to remind people of the urgency of life. On their walls hung paintings of skeletons, hour glasses, extinguished candles, wilting tulips. In their pockets they carried memento mori medallions and watch keys. It “wasn’t just a generalized response to mortality,” says Elizabeth Welch, an art curator at the Blanton Museum, “but instead specifically a performative social leveling that could be used by Late Medieval Christians to think about mortality and the inevitability of physical decay.”

The physical manifestation of a memento mori helped our ancestors process the pain that followed them around each day. The bodies on the streets and battlefields didn’t create panic, but priority, humility, urgency, appreciation. 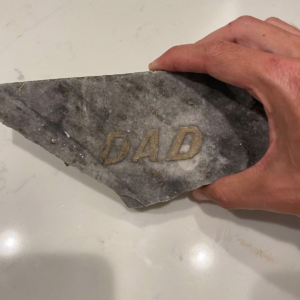 I’ve talked about my own Memento Mori, a two-sided coin, before. On the front it has a rendering of Champaigne’s Still Life with a Skull painting. On the back, it has Marcus Aurelius’s quote: “You could leave life right now. Let that determine what you do and say and think.” Except I cut off the last part—as a reminder that there isn’t even time to go through the whole quote.

But my real memento mori practice begins when I brush my teeth in the morning and when I brush them before bed in the evening. There, propped under my bathroom mirror, I have a chunk of an old Victorian tombstone. How it left that cemetery and came to be for sale, I don’t know and don’t want to know.

But I know that it sobers me and sets me right each time I look at it. Because the piece had just one word on it. It says, “Dad.”

Somebody who so identified with that word they wanted it on their tombstone; who lived and died and whose gravestone eventually even fell into disrepair. Who were they? How did they pass? Are they missed? Were they famous? It doesn’t matter. They are gone now. Almost certainly, they were gone too soon. They left behind a family. They will never walk or speak or love or cry again.

I said before that this theme in art continues. One of the performance artist Marina Abramovic’s most interesting pieces features her lying on her back, completely nude, mimicking those ancient cadaver tombs. Laid on top of her in the exact same position is a female skeleton, representing… “the last mirror we will all face.” It is a beautiful, haunting reminder of the “before and after” that every single living body ultimately experiences. Marina’s piece has echoes of the Latin expression Hodie mihi, cras tibi. The skeleton is saying to the artist, “Today it’s me, tomorrow it’s you,”

It should put everything in perspective. When my son comes to the stairs and calls me to come play, I have no problem stopping because it could be the last time that he asks me. When I think about my work and phoning it in today I think about how lucky I am to have today. So I try to live—not just during a pandemic—with the awareness that I may not be spared. That a virus has no mercy. That it does not care about what I’ve built or who I am important to.

It doesn’t care about any of us. Death is indifferent, and it is ruthlessly, inevitably victorious.

That was the purpose of the once ever-prevalent memento mori art—to remind people that death is ever-present.