Life Comes at You Fast. So You Better Be Ready.

In 1880, Theodore Roosevelt wrote to his brother, “My happiness is so great that it makes me almost afraid.” In October of that year, life got even better. As he wrote in his diary the night of his wedding to Alice Hathaway Lee, “Our intense happiness is too sacred to be written about.” He would consider it to be one of the best years of his life: he got married, wrote a book, attended law school, and won his first election for public office.

The streak continued. In 1883, he wrote “I can imagine nothing more happy in life than an evening spent in the cozy little sitting room, before a bright fire of soft coal, my books all around me, and playing backgammon with my own dainty mistress.” And that’s how he and Alice spent that cold winter as it crawled into the new year. He wrote in late January that he felt he was fully coming into his own. “I feel now as though I have the reins in my hand.” On February 12th, 1884 his first daughter was born.

Two days later, his wife would be dead of Bright’s disease (now known as kidney failure). His mother had died only hours earlier in the same house, of typhoid fever. Roosevelt marked the day in his diary with a large “X.” Next to it, he wrote, “The light has gone out of my life.”

As they say, life comes at you fast.

Have the last few weeks not been an example of that?

In December, the Dow was at 28,701.66. Things were good enough that people were complaining about the “war on Christmas” and debating the skin color of Santa Claus. In January, the Dow was at 29,348.10 and people were outraged about the recent Oscar nominations. In February, when the Dow reached a staggering 29,568.57, Delta Airlines stock fell nearly 25% in less than a week, as people argued intensely over a message from Delta’s CEO about passengers reclining their seats. Even in early March, there were news stories about Wendy’s entering the “breakfast wars” and a free stock-trading app outage that caused people to miss a big market rally.

And now? How quaint and stupid does that all seem?

Depending on the day you look, years of market gains have now been taken back. 47 million people are projected to be added to the unemployment rolls in the US. The death count from what was dismissed as a mere respiratory flu and the left’s latest hoax is now inching towards 170,000 and there are millions more confirmed cases worldwide. There have been runs on supplies. Hospitals are maxing out ventilators. The global economy has essentially ground to a halt.

Life comes at us fast, don’t it?

It can change in an instant. Everything you built, everyone you hold dear, can be taken from you. For absolutely no reason. Just as easily, you can be taken from them. This is why the Stoics say we need to be prepared, constantly, for the twists and turns of Fortune. It’s why Seneca said that nothing happens to the wise man contrary to his expectation, because the wise man has considered every possibility—even the cruel and heartbreaking ones.

And yet even Seneca was blindsided by a health scare in his early twenties that forced him to spend nearly a decade in Egypt to recover. He lost his father less than a year before he lost his first-born son, and twenty days after burying his son he was exiled by the emperor Caligula. He lived through the destruction of one city by a fire and another by an earthquake, before being exiled two more times.

One needs only to read his letters and essays, written on a rock off the coast of Italy, to get a sense that even a philosopher can get knocked on their ass and feel sorry for themselves from time to time.

What do we do?

Well, first, knowing that life comes at us fast, we should be always prepared. Seneca wrote that the fighter who has “seen his own blood, who has felt his teeth rattle beneath his opponent’s fist… who has been downed in body but not in spirit…”—only they can go into the ring confident of their chances of winning. They know they can take getting bloodied and bruised. They know what the darkness before the proverbial dawn feels like. They have a true and accurate sense for the rhythms of a fight and what winning requires. That sense only comes from getting knocked around. That sense is only possible because of their training. 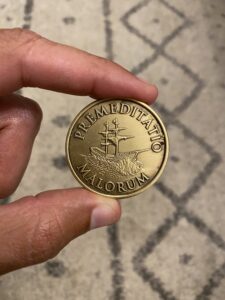 In his own life, Seneca bloodied and bruised himself through a practice called premeditatio malorum (“the premeditation of evils”). Rehearsing his plans, say to take a trip, he would go over the things that could go wrong or prevent the trip from happening—a storm could spring up, the captain could fall ill, the ship could be attacked by pirates, he could be banished to the island of Corsica the morning of the trip.

By doing what he called a premeditatio malorum, Seneca was always prepared for disruption and always working that disruption into his plans. He was fitted for defeat or victory. He stepped into the ring confident he could take any blow. Nothing happened contrary to his expectations. 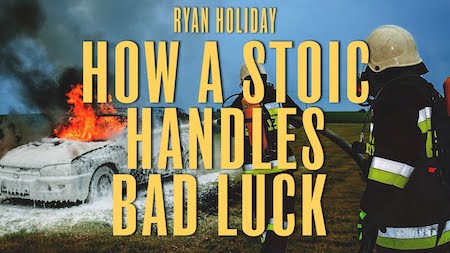 Second, we should always be careful not to tempt fate.

In 2016 General Michael Flynn stood on the stage at the Republican National Convention and led some 20,000 people (and a good many more at home) in an impromptu chant of “Lock Her Up! Lock Her Up!” about his enemy Hillary Clinton. When Trump won, he was swept into office in a whirlwind of success and power.

Then, just 24 days into his new job, Flynn was fired for lying to the Vice President about conversations he’d had with Sergey Kislyak, the Russian ambassador to the United States. He would be brought up on charges and convicted of lying to the FBI.

Life comes at us fast… but that doesn’t mean we should be stupid. We also shouldn’t be arrogant.

Third, we have to hang on. Remember, that in the depths of both of Seneca’s darkest moments, he was unexpectedly saved. From exile, he was suddenly recalled to be the emperor’s tutor. In the words of the historian Richard M. Gummere, “Fortune, whom Seneca as a Stoic often ridicules, came to his rescue.”

But Churchill, as always, put it better: “Sometimes when Fortune scowls most spitefully, she is preparing her most dazzling gifts.”

This is what Theodore Roosevelt learned, too.

Despite what he wrote in his diary that day in 1884, the light did not completely go out of Roosevelt’s life. Sure, it flickered. It looked like the flame might have been cruelly extinguished. But with time and incredible energy and force of will, he came back from those tragedies. He became a great father, a great husband, and a great leader. He came back and the world was better for it. He was better for it.

Life comes at us fast. Today. Tomorrow. When we least expect it. Be ready. Be strong. Don’t let your light be snuffed out.