Announcing: Ego Is The Enemy & How You Can Get Involved 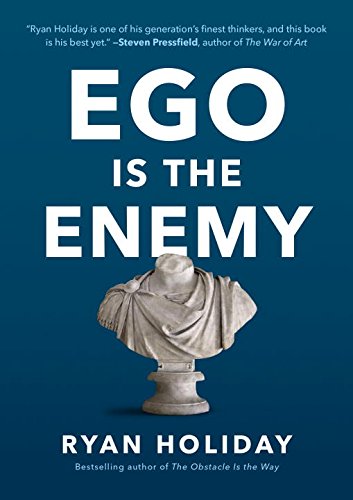 This is a somewhat unusual post. It is not the full announcement for my next book, Ego Is The Enemy (B&N)(UK), but is the first time I’m talking about it.

Ego Is The Enemy takes the thinking in The Obstacle Is The Way, and applies it to our greatest internal obstacle—our own ego. If The Obstacle Is The Way was a philosophical approach to dealing with the difficulties we face in life, Ego Is The Enemy is a philosophical exploration of difficulties we create for ourselves in life. Early in our careers, ego impedes learning and the cultivation of talent. With success, ego can blind us to our faults and sow future problems. In failure, ego magnifies each blow and makes recovery more difficult. At every stage, ego holds us back.

The book draws on a vast array of stories and examples, from literature to philosophy to history. Using the stories of people like William T. Sherman, Katharine Graham, Bill Belichick, and Eleanor Roosevelt, all of whom reached the highest levels of power and success by conquering their own egos. It also tells a bit of my own story over the last two years, and the disastrous effects of ego on the companies I’ve helped build as well as in my own personal life.

Thanks to your support, my last book was incredibly well received, it even unexpectedly found a strong footing with professional athletes. It couldn’t have happened without you. As I did last time, I wanted to reach out to you, my readers, for help and ideas in introducing this book to communities and potential audiences. If you have a podcast, have a friend who does, run a big blog, or can think of an influencer who would love this book, let me know in the form below. I’m open to anything, of course, but please, let’s think in terms of ROI for its June 14 release date.

If you have ideas, suggestions or better, have access to a large audience of your own, might want to order in bulk in exchange for speaking or consulting, or want to cover the book, I want to hear from you. Filling out the form below will give me an idea of how you can help with the launch.

Fill out my online form.

*Note: Don’t worry, I’ll still be doing all my normal marketing stuff, including a pre-order campaign like last time. This is just a way to hear from people who might have marketing/media relationships that will help the book. To get updates about Ego Is The Enemy, sign up for my reading newsletter.

Sorry, An Epiphany Isn’t What’s Going To Change Your Life

Epiphanies are bullshit. People think it’s some momentous wake up call that leads to innovation, identity crises, insight or breakthroughs.

Like that’s why someone “suddenly” quits the NFL. Or goes public with allegations. Or proposes a bold new theory about the world after staying up all night.

But the people who think that are mostly people who haven’t done anything like that. And probably never will. They haven’t had to walk away from a big job or a lot of money. Or ever questioned some dominant point of view or institution. Their creative output is next to nil. They’re too busy chasing (or waiting for) an El Dorado that doesn’t exist.

I get it. You want to be like the people you admire–and they all seem inspired, bold, and have no problem burning the place to ground. I wanted to be like that too.

But then I actually made some of those decisions. I dropped out of college and it was terrifying. I decided to write an expose about the media in which I would have to admit bad things I had done. I broke ranks with a mentor and friend and it’s been eating me up inside.

So lately, I’ve been trying to think about how that actually goes down. What is it actually like to come to question everything and change your mind or life? What do you need to know going into it?

In The Structure of Scientific Revolutions, Thomas Kuhn argued for the first time that it wasn’t flashes of brilliance that change scientific thinking, but instead it’s a slow process in which assumptions slowly unravel and then require a new explanation—a paradigm shift as he called it. In this frothy period of shift and flux, real breakthroughs begin to occur.

That isn’t how we like to imagine it though. We picture Edward Snowden hearing his bosses lay out some maniacal plan to spy on the world and deciding: “I am going to bring those motherfuckers down.” In actuality, he sat on the info for five years before going public. Doing what? Probably thinking, probably afraid, probably changing his mind a million times. It’s always more complicated—in fact, the whistleblower is usually complicit in the crimes in some way or at least blinded to their severity before coming forward.

The Fosbury Flop—which turned the Olympic High Jump on its head—wasn’t something that Dick Fosbury tried out for the first time at the 1968 Games. Nor was it something he was even certain about. Instead he’d been fooling with jumping and falling over the bar sideways as opposed to hurdling it since elementary school–to only middling results. He’d tried it high school and was told it was a “short cut to mediocrity.” He kept going back to way you were supposed to but that didn’t work either. As we know now though—after his Gold Medal and every medal since—that he was right and his technique stuck.

We think The Great Gatsby was a sniper shot of insight into the Jazz Age and its participants. In fact, the book was rejected and reworked by F. Scott Fitzgerald’s editor three times and only turned out to be right four years after publication, after the market crashed.

I think movies and television are partially responsible for this total misconception about the world. Because they can only show scenes, because they can’t get us inside the character’s head, we’ve started to think that’s how our lives should be. I think of that scene in Benjamin Button where Brad Pitt sneaks out one morning without a word and never comes back because he doesn’t want to burden his wife and family.

Yeah OK, like they would have been fighting for months and not known why. Like they wouldn’t have broached the topic or floated alternatives. Like the breakup would have stuck the first time. And he wouldn’t have been torn up inside and done a bunch of stupid things to cope with it. But as viewers all we’re left with is the action, the montage scene and the ultimate vindication, but not the process which precedes and proceeds it.

This is insidious because it intimidates first timers and the fearful. Because we believe that it must have been clear for other people, and yet it feels so opaque for us, we convince themselves not to take a risk. We doubt ourselves because we’re cut off from the humanness of the experience and the vulnerability that’s actually there.

When I wrote my first book, which was positioned as a confessional, every interviewer would ask me when I realized what I wanted to do. They’d say, “What was the thing you were asked to do that you regretted, that made you realize?”

The reality is never. I’m really struggling with it. It’s a fucking process. One that ironically didn’t even start to feel like it made sense until well into the writing and publishing process. Because that’s how people are, they act before they are fully ready and they figure things out as they go.

But I have to tell people something—so I give them an answer. Dropping out of college was the same thing. It was something I’d been considering, sure. Then I got an offer. Then I decided not to take it. Then I decided it was worth the risk. Almost immediately after, I felt it had been a mistake. But by then, I’d got into a rhythm. But a year later, I seriously considered going back. Yet my bio—my narrative—makes it seems like I knew at 19. (In fact, I turned 20 during the months this all transpired.) It’s not true, but that doesn’t help some other 19-year-old struggling with whether to leave college.

So if you’re staring some life changing decision in the face right now, you need to understand this. It is always going to be inscrutable. There will not be clarity. Not before, not during, not until well, well after.

You see, Thomas Kuhn said something else very wise and applicable here. Once a new paradigm takes hold, he said, it becomes almost impossible for people born into that paradigm to understand the logic of the system that came before them. As Kuhn put it, incommensurability separates one paradigm from the one that preceded it.

We can hardly recognize the world that we used to live in, and whatever it was that made us think the way we did. Because now things are radically different.

It would be nice if this was a clean break, but it isn’t. It’s like an internal Civil War—eventually there is a clear winner, but it didn’t feel that way at the time. It took a while for everything to get sorted out.

What I mean to say is this: embrace the limbo period. Take risk. Question things. Do not wait for certainty to act…because it isn’t coming. It never has.