This Little Decision Changed The Course of My Career

In the summer of 2019, my wife and I took our two sons for a hike in the Lost Pines Forest in Bastrop, Texas. It was a Saturday or a Sunday. I had a bunch of articles to write, but I put it aside and decided to spend some time outside with the kids in the shade of the prehistoric loblolly forest about thirty minutes from our house.

It was a lovely afternoon, despite the heat. I always love Lost Pines because it’s a freak of nature. The trees appear here in the middle of Texas, hundreds of miles further east than most of their counterparts. Two horrible fires in the last ten years have only added to the mystique, making parts feel like a haunted elephant graveyard.

As we wrapped up the hike and took the kids to the playground, suddenly, it hit me. It was a feeling that most creative people experience from time to time. You’re in the middle of not working and boom, you get hit with an idea. I have run many hundreds of miles in Lost Pines so it was a familiar feeling—I’ve sold business problems and writing problems and personal problems on the trails there.

As I was carrying my son in the backpack, my mind had drifted briefly to the fact that my book Stillness is the Key would soon be released and it would mark the end of what had become a three-book trilogy. What would I tackle next, I thought. A book about courage would be cool.

A few days later, we were on vacation in the panhandle in Florida. I was building a sandcastle with my son. Then the second lightning strike. Not just a book about courage, a series on the four virtues, starting with courage! And like that, the next four years of my life, my next creative mountain had been laid out in front of me.

I tell this story in part because that first book, Courage is Calling: Fortune Favors the Brave is now available for preorder (to be released almost two years exactly to the day the idea appeared to me). But also because it illustrates something that I learned when I was writing Stillness is the Key: our biggest breakthroughs often come when we are working on them the least, that stillness really is an important part of moving forward.

John Cage, the composer, liked to hunt for mushrooms in the woods. Musashi, the samurai, was also an avid painter and poet. Socrates liked to relax by playing games in the street with children from his neighborhood in Athens. Nietzche said that it’s only ideas that come from walking that have any worth. Dorothy Day was a lifelong walker, and it was on her strolls along the beach on Staten Island in the 1920s that she first began to feel a strong sense of God in her life and the first flickerings of the awakening that would put her on a path toward sainthood. The choreographer Twyla Tharp talks about going for “mindless mental wanderings” each day.

In my life, I’ve been repeatedly gifted with ideas—from the muses, from my own subconscious, I don’t know—when I least expected it. Running. Swimming. Playing with my kids. My wife can recognize it in my eyes and knows not to say anything when I rush into the house and head to the pile of notecards I have on the counter at all times. He’s probably come up with something…don’t interrupt or he’ll lose it and be a mess after.

This is also an important lesson, at least for me, about work-life balance. We think that to be great at what you do, it requires complete and total dedication. That there’s no time for anything else. Nonsense. I owe this four-book deal I’m now mid-way through writing—a career securing project—to the fact that I went on vacation! Don’t have time for family? I wouldn’t have the book I’m releasing next month if I had stayed home and worked. I owe it to our wonderful hike.

As excited as I am to tell you about this new book (pre-order bonuses and details here) mostly I wanted to share those insights—because they were life-changing for me. In Zen, they talk about the problem of “too much willful will,” basically, trying too hard, being too intentional. Real breakthroughs come when you’re not so controlling, when you let go. By not putting my work first, by not taking it all so seriously, I’ve found I’ve been able to reach for and hold on to more than I was with a very tight grasp.

I hope this can give you something to think about as well. Of course, executing the project required incredible amounts of work and focus. It required being at the office. It required trying very hard to get it right. But none of that would have been possible without first letting go a little, without deciding to take a hike or go to the beach.

I just want you to realize—or to remember—that may well just mean being present. It may mean rolling around in the grass with your kids or taking the dog out for a walk. It could be a long dinner with friends. It could be any number of things we’re so often too busy to do or can’t be bothered to do.

If only we had the courage to let go…what we might be able to find. 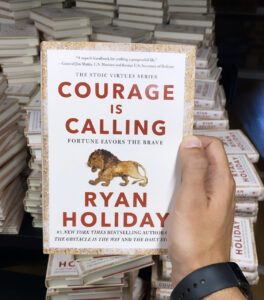 P.S. If you haven’t already, I’d love for you to pre-order Courage is Calling. Pre-orders make a huge difference for authors as they try to get a book off the ground. And to make it worth your while, I’ve put together a bunch of cool pre-order bonuses, including signed pages from the drafts of the book as I wrote them. Click here to learn more about all the bonuses and how to receive them!

« Previous post
15 Ways To Overcome The Fear That’s Killing Your Potential
Next post »
Life Happens in Public. Get Used to It.
Go to mobile version