The Things You Think Matter…Don’t

I dropped out of college.

When this happened it was a big deal—to my parents anyway. Then it was a big deal when people met me because they were constantly surprised by it. You didn’t finish college?! But for all the warnings and then surprise, there has been literally zero times where my lack of a degree has come up in the course of any business deal or project.

So I am always surprised by the lengths people will go to get their degree. I read a fascinating book a couple years ago about the Varsity Blues scandal and the parents who bribed their kids into various colleges—many of which were not even that hard to get into. The parents were so convinced that college mattered that they were willing to do just about anything to make sure their kids got in…even in one case where one of the girls had millions of YouTube followers and didn’t want to go to college. Or another where the daughter wanted to be an actress and the mother was an actress, but she still tried to cheat on her daughter’s SAT’s to get into Juilliard (even though Julliard doesn’t require SATs!)

It reminds me of a line from Peter Thiel who pointed out that we can get so good at trying to win that we don’t stop and ask if we’re playing the right game.

Here’s something I thought mattered a lot: The New York Times Bestseller list. When my first book came out I worked very hard to sell a lot of copies so I could say I was an NYT bestseller. I missed it (for somewhat suspicious reasons) and hit the WSJ list instead. As it turns out, this had absolutely no impact on the sales of the book or my ability to have a writing career. What mattered was whether the book continued to sell well over time and whether I continued to have interesting things to say.

Literally no one ever bought the book because it hit one list…and certainly no one didn’t buy it because it wasn’t on the other.

But I found it quite funny in the years since that when people would introduce me for talks they would call me “a New York Times Bestselling author” because they just assumed, and it sounded like something important. So in one sense the term did matter and mean something…yet the fact they couldn’t tell or care about the difference was a reminder to me that it didn’t really matter at all.

I would write more than a half dozen other books before I did become “a New York Times Bestselling author” in fact and let me tell you, nothing changed. And when I did debut on the list for my book Stillness is the Key, it was at the #1 spot. But nobody threw me a parade. My speaking fee and my royalties did not go up. The publisher sent me a cool plaque but it wasn’t that cool…my wife asked that I keep it at the office instead of the house.

Still, whenever I talk to first-time authors and ask them what they hope to do with their book, hitting the list is almost always at the top of their list. I realize it’s easy for me to say that it doesn’t matter, since I have the plaque in my office, but it’s true. I wouldn’t trade my sales numbers for more weeks on the list. I wouldn’t trade having written books I’m proud of to spend more time there either. Writing a book that I’m proud of, saying what I have to say, growing as a writer in doing it, making something that reaches people, that makes a difference in their lives? That’s way more important.

Sometimes our kids can help us realize this (as the Varsity Blues kids often tried in vain to do). We did an email about David Letterman for DailyDad.com recently (sign up!). After becoming the longest-serving late night talk show host in the history of American television (33 seasons), the king of late night decided to walk away. He went and told his young son Harry, “I’m quitting, I’m retiring. I won’t be at work every day. My life is changing; our lives will change.” Who knows what Letterman expected his son to say, but certainly he expected more than, “Will I still be able to watch the Cartoon Network?” Letterman replied, “I think so. Let me check.”

We spent our energy—our lives—slaving away, chasing things that don’t matter. Worse, we tell ourselves we’re doing it for some specific reason—for our careers, for our kids…but it’s all based on nothing! They don’t care! Not like we think they do.

Why do we do this? One, I guess it’s because we don’t know, we don’t listen. We only realize the things are worthless once we get them…even though plenty of people had already returned to the cave and told us we were chasing shadows.

But I think the biggest reason is actually the biggest thing we chase that doesn’t matter. We chase achievements and money and status because we’re trying to create a legacy. Because we want people to remember us, for our stuff to last.

You want to talk about what really doesn’t matter? Other people’s opinions of you when you’re dead! As Marcus Aurelius writes in Meditations, “people who are excited by posthumous fame forget that people who remember them will soon die too. And those after them in turn.” And suppose all those people you want to remember you were immortal, Marcus says, “what good would it do you?” You’ll still be dead!

A couple of years ago, I worked on an album that won a Grammy. I got to go on stage and accept it with a group of producers who all had to share one statue together. So a few months later, I had my own commemorative with a little reminder: “When you die, this will go in the trash alongside all your other ‘accomplishments.’”

None of that external stuff matters.

Only right now matters. The life you’re living—that’s the only monument that counts. Who you are in this moment, how you treat people, how you treat yourself—that is what you think doesn’t matter…but does. That is the real legacy.

And it’s passing you by as you read this. 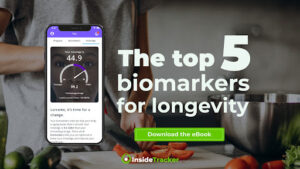 This week’s article is sponsored by InsideTracker. Founded in 2009 by top scientists from acclaimed universities in the fields of aging, genetics, and biology, InsideTracker is a truly personalized nutrition and performance system. To live your longest and healthiest life possible, your body needs to be periodically tested and recalibrated. Blood biomarkers—objective measures of health status—change over time. And certain blood biomarkers are more closely associated with aging than others. InsideTracker has identified five main blood biomarkers related to healthy aging. All five of these biomarkers are measured as part of their Ultimate Plan.

For a limited time, InsideTracker is offering a FREE ebook: The Top 5 Biomarkers for Longevity plus 20% off the entire InsideTracker store! Head on over toinsidetracker.com/RSS to get started!​