It’s the Little Moments That Make the Big Lessons

My new book Lives of the Stoics is out now!

On a fateful day late in the fourth century BCE, after a disastrous voyage on the Mediterranean, the Phoenician merchant Zeno washed up penniless in Athens. He could have despaired. Instead, he studied philosophy and ended up founding a school known as Stoicism. “I made a prosperous voyage,” Zeno would later say, “when I suffered a shipwreck.”

In the first century BCE, Pompey tried to corrupt Marcus Porcius Cato by dangling a marriage alliance. “Go and tell Pompey,” he instructed the go-between, that “Cato is not to be captured by way of the women’s apartments.” A few years later, his daughter, collaborating in an attempt to overthrow Julius Caesar, would stab herself in the leg to test her ability to withstand torture. Able to successfully bear the pain, she and her husband Brutus went ahead with the conspiracy. Several generations would pass and eventually place Marcus Aurelius at the head of the Roman empire. A friend stopped Marcus as he was leaving his home one morning. Where are you going? To handle business? No, Marcus was on his way to attend a philosophy lecture. “Learning is a good thing, even for one who is growing old,” Marcus told the stunned man. “From Sextus the philosopher I shall learn what I do not yet know.”

These little moments—these are insights into the lives of what made the greats great.

This, the great moral biographer Plutarch said, is why you can often learn more from a single anecdote than a sweeping historical portrait. Unlike the biographers of our time, who publish big, thick books filled with footnotes and postmodern digressions, Plutarch included only the essence of great men and women, so that he might inspire us to follow in their footsteps. He was obsessed by what we could learn from the figures he wrote about.

“It is not histories I am writing,” Plutarch would write, “but lives; and in the most glorious deeds there is not always an indication of virtue or vice, indeed a small thing like a phrase or a jest often makes a greater revelation of a character than battles where thousands die.”

This distinction is core to Stoicism. Study the philosopher, they said, not the philosophy. Unlike the so-called “pen-and-ink philosophers”—as the type was derisively known even 2000 years ago—the Stoics said not to pay so much attention to what philosophers have thought or written because what counts is what they do. The choices they made, the causes they served, the principles they adhered to in the face of adversity. They cared about what you did, not what you said.

“Don’t talk about your philosophy,” Epictetus would say, “embody it.” That’s why he would become so frustrated with his students who congratulated themselves on being able to read the obscure writings of Chrysippus: they were missing the point. Philosophy wasn’t about big words or complicated texts. It was about applying concepts to the real world. It was about living a happy and resilient and purposeful life.

“I know,” Seneca wrote in 55 CE in a book on mercy written for the young emperor Nero, “that the Stoics have a bad reputation among the uninformed for being too callous and therefore unlikely to give good advice to kings and princes: they’re blamed for asserting that the wise man does not feel pity and does not forgive… In fact, no philosophical school is kinder and gentler, nor more loving of humankind and more attentive to the common good, to the degree that its very purpose is to be useful, bring assistance and consider the interests not only of itself as a school but of all people, individually and collectively.”

It’s on these models that my latest book is written: Lives of the Stoics: The Art of Living from Zeno to Marcus Aurelius. With Stephen Hanselman, my co-author on The Daily Stoic, we pored over hundreds of ancient texts and modern scholarship to bring you 26 biographies of the most important—and most interesting—Stoics from history. Inspired by Plutarch, we wrote Lives of the Stoics with an eye towards practical application and advice. We wanted to leave you not only with some facts about these figures, but with a fuller sense of their essence and the aspects of their lives that teach us the most about the art of living.

That’s the only reason to study philosophy—to become a better person.

Anything else, as Nietzsche said, is merely a “critique of words by means of other words.” It’s empty talk. Schopenhauer called it “fencing in the mirror.”

This is, unfortunately, the role philosophy plays in the modern world. Today it’s about what smart people say, what big words they use, what paradoxes and riddles they can baffle us with.

No wonder we dismiss it as impractical. It is!

“To be a philosopher is not merely to have subtle thoughts, nor even to found a school,” Thoreau said. “It is to solve some of the problems of life, not theoretically, but practically.”

That’s what the Stoics were after, what we remain interested in to this day: lights to illuminate the path in life. They wanted to know, as we want to know, how to find tranquility, purpose, self-control, and happiness. This journey, whether it begins in ancient Greece or modern America, is timeless. It is essential. It is difficult. Which is why we ask, as the Stoics asked: Who can help me? What is right? Where is true north?

“You’ve wandered all over,” Marcus Aurelius wrote to himself in Meditations, “and finally realized that you never found what you were after: how to live. Not in syllogisms, not in money, or fame, or self-indulgence. Nowhere.”

If philosophy is anything, it’s an answer to that question—how to live. It’s what we have been looking for. “Would you really know what philosophy offers to humanity?” Seneca asks in his Letters from a Stoic. “Philosophy offers counsel.” Seneca said that was the most powerful lesson he learned from his childhood tutor, Attalus the Stoic. The purpose of studying philosophy, of reading about the great men and women who lived and died before you, of learning about that simple question Zeno asked, that small decision Cato made, that one passage that guided Marcus was to “take away with him some one good thing every day: he should return home a sounder man, or on the way to becoming sounder.”

You must heed this counsel and struggle with what Seneca described as the most important job of a philosopher—the act of turning words into works in the real world. To study the lives of the men and women who came before us for the same reason Plutarch (who wrote about many of the Stoics as well) did: to turn the lessons of the lives, their living and their dying, their succeeding and their failing, into actions in the real world.

For it is this, and nothing else, that earns one the title: Philosopher.

My new book Lives of the Stoics: The Art of Living from Zeno to Marcus Aurelius is finally out. I can’t wait for you to read it. If you’ve gotten anything out of these emails over the years, it would mean a lot to me if you could support this book, which I have been working on for a long time. It’s worth your time, I promise. 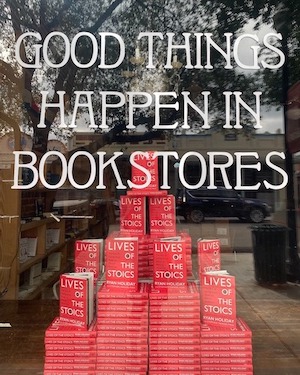