Moderation Is the Highest Form of Greatness. Here’s Why.

You can preorder signed copies of my new book Lives of the Stoics here.

This is not a political argument.

But it says something about our politics right now that the right in America is convinced that Joe Biden is a radical leftist, while the progressive left holds up their collective nose at his unacceptable reputation as an establishment Democrat, which is to say, a “moderate.”

As if moderation hasn’t been considered a key virtue for thousands of years!

Just look at Aristotle’s Golden Mean. Most virtues, the philosopher explained, exist as a midpoint between two vices. Courage, for example, exists in the middle of recklessness on the one end and cowardice on the other. Love sits between obsession and apathy. Justice, between authoritarianism and anarchy.

Instead of understanding and admiring moderation, we’ve come to see it as a kind of weakness wherever it shows up in the culture. The reaction to the retirement of Indianapolis Colts quarterback Andrew Luck at the beginning of last year’s NFL season is just one of many recent illustrations. Despite four appearances in the Pro Bowl, three trips to the playoffs, two AFC South titles and nearly $100 million in career earnings, Luck was derided by many sportswriters for choosing not to continue to play through the pain, or grind himself down for the game. How dare he have enough, they said. How dare he leave $450 million on the table. He should be driven to win at all costs. Leave it all out there on the field… including his future. Why not? He should have no interests worth pursuing outside football, anyway!

Moderation? Someone who understands there is merit in the grievances from both sides of the political spectrum? That’s a vice. You’re either an unpatriotic cuck and a simp or a xenophobic white supremacist. If that sounds crazy, watch what happens anytime anybody says anything reasonable these days. They are immediately besieged by both sides.

And let’s not even get started with pleasure or money or anything else like that. More is better. The person with the most is obviously the happiest and the best, right? Would there even be reality television without immoderate people? Or is pop and influencer culture almost entirely predicated on people who, with no sense of self-awareness, have given themselves over entirely to the pursuit of total pleasure, mega fame, multi-millions and absolute power?

We even get the word “Epicurean” wrong. In reality, Epicurus was a very moderate guy. There’s a letter he once sent to a patron who had offered him whatever he wanted. Epicurus could have requested money or exotic goods. Instead, he asked for a small pot of cheese. That’s it! That’s all the famous Epicurean wanted. We’re so depraved, we’ve come to use that word as a cover for our own excesses.

Epicurus made this specific request of his patron because he knew that simple, ordinary pleasures, enjoyed in moderation, were actually the most enjoyable. As he wrote in a letter:

By pleasure we mean the absence of pain in the body and of trouble in the mind. It is not an unbroken succession of drinking-bouts and of merrymaking, not the satisfaction of lusts, not the enjoyment of the fish and other delicacies of a luxurious table, which produce a pleasant life; it is sober reasoning, searching out the motives of every choice and avoidance, and banishing those beliefs through which the greatest disturbances take possession of the soul. Of all this the greatest good is prudence. For this reason prudence is a more precious thing even than the other virtues, for a life of pleasure which is not also a life of prudence, honour, and justice; nor lead a life of prudence, honour, and justice, which is not also a life of pleasure. For the virtues have grown into one with a pleasant life, and a pleasant life is inseparable from them.

That idea of avoiding the hangover—of knowing the reasonable limits and prudently following them? This is just another way of thinking about moderation. Better that Andrew Luck walk away from football while he could still walk away, than to hang on for one hit too many and regret it for the rest of his painful life. In Silicon Valley, entrepreneurs talk condescendingly about people who sold their companies too early—as if $1B for Instagram wasn’t more money than a person could spend in a lifetime. The people who let it ride and lost everything? We seem to pretend those folks don’t exist.

Moderation is not being a pussy. It’s being smart. It’s knowing what enough is. It’s getting out while the getting is good. Sure, it’s also about leaving a little on the table sometimes, even in the most critical moments, but there are far worse sins in this world. It mean even mean *gasp* being merciful to the other side when you win.

To bring this back to where I began—politics—but in a non-partisan way, I think this passage from David Brooks is worth reading, whatever party you belong to.

If you look at who actually leads change over the course of American history, it’s not the radicals.

At a certain point, radicals give way to the more prudent and moderate wings of their coalitions. In the 1770s, the rabble-rousing Samuel Adams gave way to the more moderate John Adams (not to mention George Washington, James Madison and Alexander Hamilton). In the middle of the 19th century, radicals like John Brown and purists like Horace Greeley gave way to the incrementalist Abraham Lincoln. In the Progressive era, the radicals and anarchists who started the labor movement in the 1880s gave way to Theodore Roosevelt.

Radicals are not good at producing change because while they are good at shaking up the culture, they don’t have practical strategies to pass legislation when you have to get the support of 50 percent plus one.

What Brooks is doing is making an argument for moderates—not Biden specifically, but moderates generally. Not strident purists or populists, but people who understand that both sides are likely to have good ideas and, more essentially, that you need buy-in from more than just your own side to create change.

Moderation is not just splitting the difference. It’s not refusing to take a stand. It’s actually a pretty radical and difficult position to hold. Aristotle defined it as the hardest thing in the world to do—to find the right “feelings at the right time, on the right occasion, towards the right people, for the right purpose and in the right manner, is to feel the best amount of them, which is the mean amount—and the best amount.” He says that since feelings and actions are the objects of greatness, “feelings and actions excess and deficiency are errors, while the mean amount is praised, and constitutes success.”

I’ll grant you that it’s more exciting, more inspiring to be idealistic… but only on paper. The real work—the tangible, sustainable work—is done by the people who are neither pessimistic or delusional. It’s done by the pragmatists, who know how to balance what could be done with what can be done.

In fact, the entire American system is designed around moderation. Almost all the decisions of the founders were designed to make it really hard to rule from an extreme or minority position. The need for compromise and settling was a feature, not a bug of the system. It was to prevent lurching from one set of policies to the other. It was to reduce the changes of ideological swings made in the heat of a crisis, or in reaction to a trend.

There is even a supposed exchange between Washington and Jefferson over breakfast. Why do we pour our coffee from the cup to the saucer, Washington asked? (This was how coffee used to be consumed.) To cool it, Jefferson replied. The Senate, Washington replied, with its longer term lengths and smaller size, was designed for the same purpose. To cool legislation instead of being burned by political pressure that is more constant and severe in the House with its larger numbers, smaller constituencies and biennial elections.

It’s not just about the noun—being “a moderate”—it’s about the verb, too. Moderating.

I’m not saying any of this to necessarily endorse Joe Biden. I am just making a plea for that old but forgotten virtue in politics as well as in life.

You don’t respond to a lurch in one direction by lurching the opposite way with equal force. The dangers of right-wing populism should not be answered with left-wing populism. Both are dumb and impossible to govern with. Just because everyone else is running their life to the extreme, just because other people are unhealthy, doesn’t mean you have to be, too. 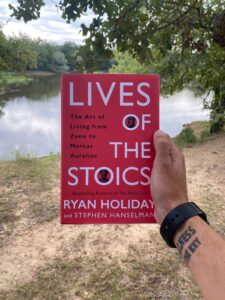 My new book Lives of the Stoics is of course in part about moderation–as that’s a key virtue of Stoicism—and I think a running theme through the lives of the 26 ancient Stoic philosophers I study in the book. I’m really excited about this one and can’t wait for you to read it. If you pre-order it now, there are a bunch of awesome free bonuses and of course it helps me out a great deal. B&N has a limited run of signed copies as well. It hits stores 9/29, but please do preorder it now!