If You Want to Be Smart, You Must Do This 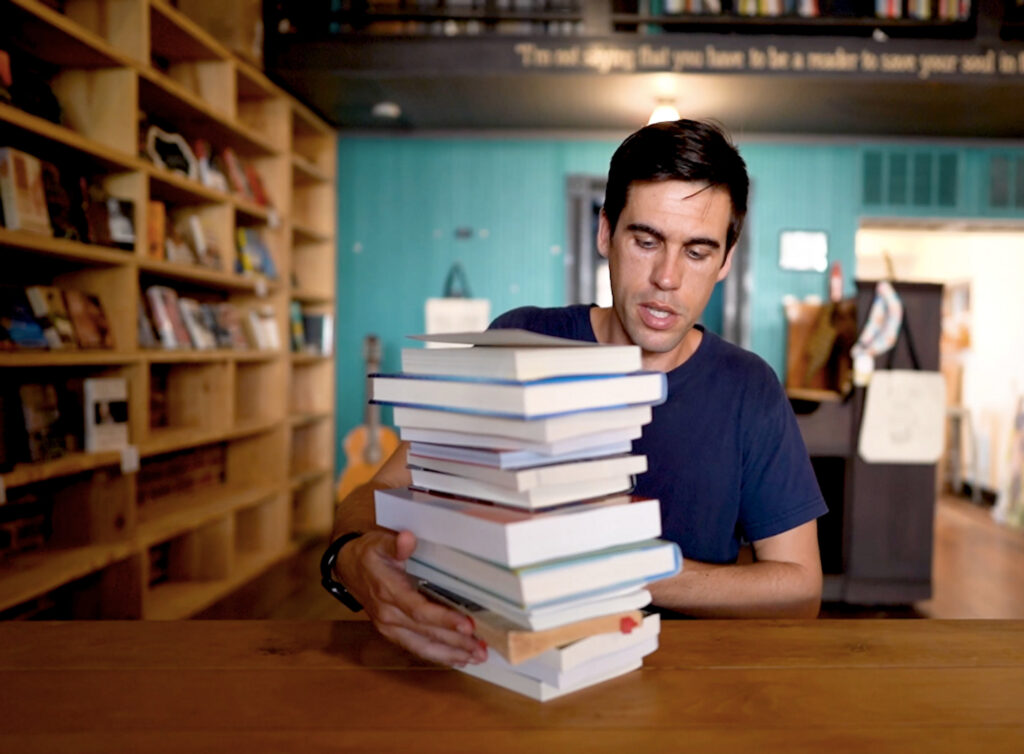 There are lots of smart people.

There are not a lot of people who can do this smart thing.

The poet John Keats called it “negative capability”—the mental fortitude to be able to entertain multiple contradictory ideas in your head at the same time. Or as F. Scott Fitzgerald famously wrote, “The test of a first-rate intelligence is the ability to hold two opposing ideas in mind at the same time and still retain the ability to function. One should, for example, be able to see that things are hopeless, yet be determined to make them otherwise.”

The world is complicated, ambiguous, paradoxical, and contradictory. To make sense of it, to survive it, one must be able to balance conflicting ideas. To try to force everything into a simple box, or adhere to a simple theory? It just won’t work.

People will sometimes email me, “Ryan, Marcus Aurelius contradicts himself. Sometimes he says to zoom in and other times he says to zoom out.” Or they’ll point out that Seneca’s writings tell us to be aware of the dangers of the future and also never avoid anxiety and worry.” Or that they are confused because Law 3 in Robert Greene’s The 48 Laws of Power is “conceal your intentions” but Law 6 is “court attention at all cost.”

The answer is yes.

The famous lines from Walt Whitman are,

Do I contradict myself?

Very well then I contradict myself,

(I am large, I contain multitudes.)

Yes, Marcus Aurelius contradicts himself. Yes, the Stoics contradict themselves. Yes, Robert Greene’s laws of power contradict each other. Yes, I contradict myself.

Because the world contradicts itself. Because different situations call for different things. Because everything in life depends on context.

Look, even the premise that only a genius can manage negative capability is itself a little contradictory. Because you know who has no problem holding a bunch of conflicting ideas at the same time? Really dumb people!

So negative capability seems to follow the Midwit Meme curve. 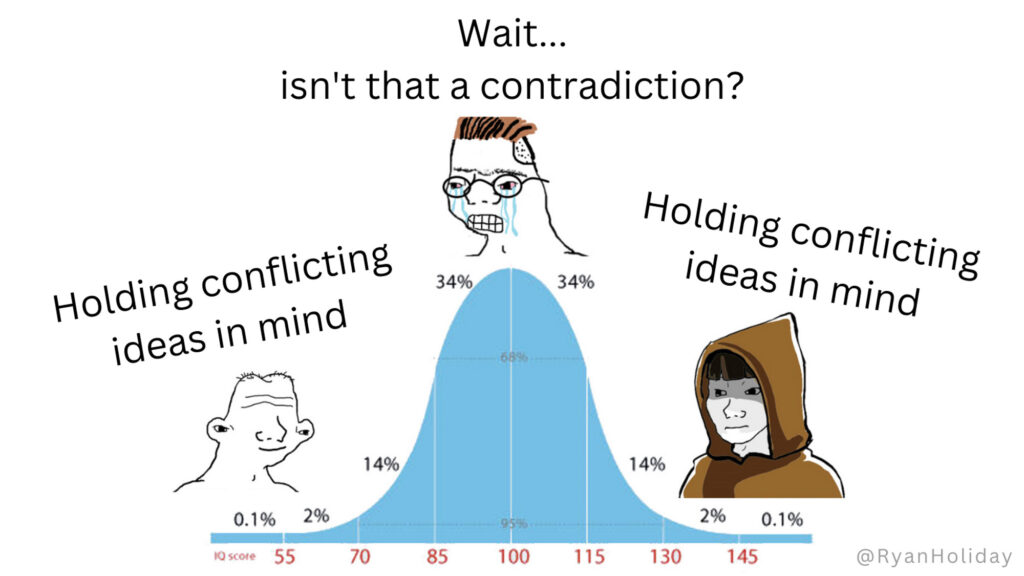 So how do you cultivate the kind of negative capability Keats was talking about? Here are some thoughts:

[1] Read widely and from people you disagree with. One of the most surprising parts of Seneca’s writing is how often the avowed Stoic quotes Epicurus, the founder of the rival school, Epicureanism. The reason he was so familiar with Epicurus, Seneca wrote, was not because he was deserting the writings of the Stoics, but because he was reading like a spy in the enemy’s camp. That is, he was deliberately reading and immersing himself into the thinking and the strategies of those he disagreed with. To see if there was anything he could learn. Epicurus’s dictum was that “One sage is no wiser than another.” The Stoics believed this too—that we should actively pursue and engage with anyone who can be a source of wisdom to us, regardless of the school of thought from which that wisdom arose. Because if there is wisdom out there to be had, we’d be wise to avail ourselves of it.

[2] Study deeply. Marcus Aurelius chided himself “not to be satisfied with just getting the gist of it.” Instead, he said, “read attentively.” Go “directly to the seat of knowledge.” Seek out tutors and mentors. Linger, as Seneca said, on a small number of master thinkers, reading and re-reading their work. Go way beyond the “gist.”

[3] Put yourself in rooms where you’re the least knowledgeable person. Observe and learn. Ask questions. That uncomfortable feeling, that defensiveness that you feel when your most deeply held assumptions are challenged? Do it deliberately. Let it humble you. In my own education, I’ve always followed Marcus Aurelius’ rule: “go straight to the seat of intelligence.” He also writes, “Mastery of reading and writing requires a master. Still, more so life.” For me, Robert Greene was and is my master in writing and, more so, in life. Go straight to the sources of knowledge, people who have different perspectives and expertise, people who can help you see things from a new angle and to consider alternative viewpoints. Absorb as much as you can from them.

[4] Understand that timing and context are everything. Confucius was once asked for advice by a student, and in replying essentially urged him to wait and be patient. Later he was asked for advice by another student, and advised that student to not be patient and to solve the problem immediately. An observant third student noticed the seemingly contradictory nature of Confucius’ responses and asked him to explain. Confucius replied, “Ran Qiu is over cautious and so I wished to urge him on. Zilu, on the other hand, is too impetuous, and so I sought to hold him back.” Everybody is different. Every situation is different.

[5] Embrace epistemic humility. Epictetus reminds us that “it’s impossible to learn that which you think you already know.” To the Stoics, particularly Zeno, conceitedness was the primary impediment to wisdom. Because when you’ve always got answers, opinions and ready-made solutions, what you’re not doing is learning. The physicist John Wheeler said that “as our island of knowledge grows, so does the shore of our ignorance.” The point is the more you know the more you realize there is much more to know.

[6] Keep your identity small. This is a rule from the great Paul Graham. His point was that the more you identify with things—being a member of a certain political party, being seen as smart, being seen as someone who drives a fancy car or someone who belongs to this club or that ideology—the harder it is for you to change your mind or entertain new points of view. You want to remain a free agent.

[7] Don’t always have an opinion. It’s possible, Marcus Aurelius said, to not have an opinion. Practice the ability of having absolutely no thoughts about something. You should be able to have multiple ideas you’re working on in your head at one time, as opposed to a bunch of things you have strong opinions about.

[8] Flexibility is key. A colleague of Churchill once observed that Churchill “venerated tradition but ridiculed convention.” The past was important, but it was not a prison. The old ways—what the Romans called the mos maiorum—were important but not to be mistaken as perfect. Plenty of people have been buried in coffins of their own making. Before their time too. Because they couldn’t understand that “the way they’d always done things” wasn’t working anymore. Or that “the way they were raised” wasn’t acceptable anymore. We must cultivate the capacity for change, for flexibility and adaptability. Continuously, constantly.

It’s one of the greatest exchanges between Epictetus and a student. “Tell me what to do!” the student says. Epictetus replied, “you must understand how laughable it is to say, ‘Tell me what to do!’” The student is confused. Epictetus says, “What advice could I possibly give? No, a far better request is, ‘Train my mind to adapt to any circumstance.’ . . . In this way, if circumstances take you off script . . . you won’t be desperate for a new prompting.”

It would be nice if someone could show us exactly what to do in every situation. Indeed, this is what we spend a good portion of our lives doing: preparing for this, studying for that. Saving for or anticipating some arbitrary point in the future. But that’s not life. Life punches us in the face. It destroys our plans.

The Stoics did not seek to have the answer for every question or a plan for every contingency. Yet they’re also not worried. Why? Because they have confidence that they’ll be able to adapt and change with the circumstances. Rooted in the teachings of Epictetus, the United States Navy Vice Admiral and prisoner of war James Stockdale perfectly described this mental attitude when he said that to survive years of imprisonment and torture, he needed a paradoxical combination of optimism and realism. He needed to maintain unwavering faith that he would ultimately prevail, and at the same time, he needed to confront the brutal facts of his current situation. As Fitzgerald put it above, Stockdale needed to “be able to see that things are hopeless yet be determined to make them otherwise.”

Instead of looking for instruction, the Stoic cultivates skills like creativity, independence, self-confidence, ingenuity, and the ability to problem solve. They cultivate negative capability. They cultivate true genius.

In this way, they are resilient instead of rigid.

« Previous post
The (Very) Best Books I Read In 2022
Next post »
Can You Be Grateful Even For This?
Go to mobile version