How To Recover When The World Breaks You

I am excited to finally be able to announce what is I think my most important book: Stillness Is The Key, the books that completes the trilogy that began with The Obstacle is The Way and Ego is the Enemy. I put together a bunch of bonuses I’m offering to everyone who preorders. And there are 3,000 limited edition signed and numbered copies from Barnes and Noble.

There is a line attributed to Ernest Hemingway — that the first draft of everything is shit — which, of all the beautiful things Hemingway has written, applies most powerfully to the ending of A Farewell to Arms. There are no fewer than 47 alternate endings to the book. Each one is a window into how much he struggled to get it right. The pages, which now sit in the Hemingway Collection at the John F. Kennedy Library in Boston, show Hemingway writing the same passages over and over. Sometimes the wording was nearly identical, sometimes whole sections were cut out. He would, at one moment of desperation, even send pages to his rival, F. Scott Fitzgerald, for notes.

One passage clearly challenged Hemingway more than the others. It comes at the end of the book when Catherine has died after delivering their stillborn son and Frederic is struggling to make sense of the tragedy that has just befallen him. “The world breaks everyone,” he wrote, “and afterward many are strong at the broken places. But those that will not break it kills.”

In different drafts, he would experiment with shorter and longer versions. In the handwritten draft he worked on with F. Scott Fitzgerald, for instance, Hemingway begins instead with “You learn a few things as you go along…” before beginning with his observation about how the world breaks us. In two typed manuscript pages, Hemingway moved the part about what you learn elsewhere and instead added something that would make the final book — “If people bring so much courage to this world the world has to kill them to break them, so of course it kills them.”

My point in showing this part of Hemingway’s process isn’t just to definitively disprove the myth — partly of Hemingway’s own making — that great writing is something that flows intuitively from the brain of a genius (no, great writing is a slow, painstaking process, even for geniuses). My point is to give some perspective on one of Hemingway’s most profound insights, one that he, considering his tragic suicide some 32 years later, struggled to fully integrate into his life.

The world is a cruel and harsh place. One that, for at least 4.5 billion years, is undefeated. From entire species of apex predators to Hercules to Hemingway himself, it has been home to incredibly strong and powerful creatures. And where are they now? Gone. Dust. As the Bible verse, which Hemingway opens another one of his books with (and which inspired its title) goes:

“One generation passeth away, and another generation cometh: but the earth abideth forever…The sun also ariseth, and the sun goeth down, and hasteth to the place where he arose…”

The world is undefeated. So really then, for all of us, life is not a matter of “winning” but of surviving as best we can — of breaking and enduring rather than bending the world to our will the way we sometimes suspect we can when we are young and arrogant.

I write about Stoicism, a philosophy of self-discipline and strength. Stoicism promises to help you build an “inner citadel,” a fortress of power and resilience that prepares you for the difficulties of the world. But many people misread this, and assume that Stoicism is a philosophy designed to make you superhuman — to help you eliminate pesky emotions and attachments, and become invincible.

This is wrong. Yes, Stoicism is partly about making it so you don’t break as easily — so you are not so fragile that the slightest change in fortune wrecks you. At the same time, it’s not about filling you with so much courage and hubris that you think you are unbreakable. Only the proud and the stupid think that is even possible.

Instead, the Stoic seeks to develop the skills — the true strength — required to deal with a cruel world.

So much of what happens is out of our control: We lose people we love. We are financially ruined by someone we trusted. We put ourselves out there, put every bit of our effort into something, and are crushed when it fails. We are drafted to fight in wars, to bear huge taxes or familial burdens. We are passed over for the thing we wanted so badly. This can knock us down and hurt us. Yes.

Stoicism is there to help you recover when the world breaks you and, in the recovering, to make you stronger at a much, much deeper level. The Stoic heals themselves by focusing on what they can control: Their response. The repairing. The learning of the lessons. Preparing for the future.

This is not an idea exclusive to the West. There is a form of Japanese art called Kintsugi, which dates back to the 15th century. In it, masters repair broken plates and cups and bowls, but instead of simply fixing them back to their original state, they make them better. The broken pieces are not glued together, but instead fused with a special lacquer mixed with gold or silver. The legend is that the art form was created after a broken tea bowl was sent to China for repairs. But the returned bowl was ugly — the same bowl as before, but cracked. Kintsugi was invented as a way to turn the scars of a break into something beautiful.

You can see in this tea bowl, which dates to the Edo period and is now in the Freer Gallery, how the gold seams take an ordinary bowl and add to it what look like roots, or even blood vessels. This plate, also from the Edo period, was clearly a work of art in its original form. Now it has subtle gold filling on the edges where it was clearly chipped and broken by use. This dark tea bowl, now in the Smithsonian, is accented with what look like intensely real lightning bolts of gold. The bowl below it shows that more than just precious metals can improve a broken dish, as the artist clearly inserted shards of an entirely different bowl to replace the original’s missing pieces.

In Zen culture, impermanence is a constant theme. They would have agreed with Hemingway that the world tries to break the rigid and the strong. We are like cups — the second we are made we are simply waiting to be shattered — by accident, by malice, by stupidity or bad luck. The Zen solution to this perilous situation is to embrace it, to be okay with the shattering, perhaps even to seek it out. The idea of wabi-sabi is precisely that. Coming to terms with our imperfections and weaknesses and finding beauty in that.

So both East and West — Stoicism and Buddhism — arrive at similar insights. We’re fragile, they both realize. But out of this fragility, one of the philosophies realizes there is the opportunity for beauty. Hemingway’s prose rediscovers these insights and fuses them into something both tragic and breathtaking, empowering and humbling. The world will break us. It breaks everyone. It always has and always will.

The author will struggle with the ending of their book and want to quit. The recognition we sought will not come. The insurance settlement we so desperately needed will be rejected. The presentation we practiced for will begin poorly and be beset by technical difficulties. The friend we cherished will betray us. The haunting scene in A Farewell to Arms can happen, a child stillborn and a wife lost in labor — and still tragically happens far too often, even in the developed world.

The question is, as always, what will we do with this? How will we respond?

Because that’s all there is. The response.

This is not to dismiss the immense difficulty of any of these ordeals. It is rather, to first, be prepared for them — humble and aware that they can happen. Next, it is the question: Will we resist breaking? Or will we accept the will of the universe and seek instead to become stronger where we were broken?

Death or Kintsugi? Fragile or, to use that wonderful phrase from Nassim Taleb, Antifragile?

Not unbreakable. Not resistant. Because those that cannot break, cannot learn, and cannot be made stronger for what happened.

Those that will not break are the ones who the world kills.

P.S. Stillness is the Key comes out October 1st. I’m as proud of this as anything I have ever written. I hope you’ll check it out! 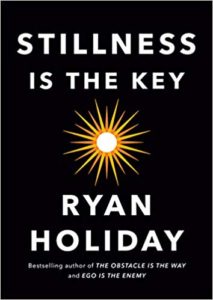