What Ego Edges Out…

Exciting news, my book Ego is the Enemy is just $1.99 as an ebook for a very limited time. Check it out!

Everyone is trying to do something.

Try start a company or write a book.

To be a good dad or a good employee.

To get in better shape, or help a friend.

To pick up the pieces after a divorce,

or to get picked for a new project.

Whatever it is, whatever we’re doing, ego is the enemy.

Because what is ego? It’s not confidence—which is properly defined as evidence of our strengths and abilities. Ego is something different, something less earned, a kind of unhealthy belief in our own importance. The idea that we have unlimited strengths and no weaknesses. It’s the voice whispering in our ear that we’re better than other people, that our needs matter more, that the rules don’t apply to someone as exceptional as we are. It’s the sense that we are special and therefore need this success or that piece of recognition to prove it (or rather, we deserve it because well, because). It’s the belief that everyone else is watching us, that we’re destined for greatness.

I’m talking about ego in the colloquial sense, of course. Freud was fond of explaining the ego by way of analogy—our ego was the rider on a horse, with our unconscious drives representing the animal while the ego tried to direct them. Modern psychologists, on the other hand, use the word “egotist” to refer to someone pathologically focused on themselves and with disregard for anyone else.

All these definitions are true enough but there is a more common form of ego. The one I was just talking about. It’s that petulant child inside every person, the one that must get their way. The need to be better than, more than, recognized for, far past any reasonable utility—that’s ego. It’s the sense of superiority and certainty that exceeds the bounds of confidence and talent. It’s when the notion of ourselves and the world grows so inflated that it begins to distort the reality that surrounds us. When, as the football coach Bill Walsh explained, “self-confidence becomes arrogance, assertiveness becomes obstinacy, and self-assurance becomes reckless abandon.”

We all have that. We’ve all been guilty of it at one time or another.

The thing about ego is not just that it’s unattractive. It’s that it is much less effective as a lifestyle and professional strategy than humility and confidence are.

Look at Donald Trump. Sure, he’s president and it was partly ego that got him there (a confident person looking at his skills and his chances of winning probably wouldn’t have run). But even his supporters concede that his ego has made a very difficult job even harder. It dragged out the Mueller investigation (indeed, it brought it on in the first place). It’s prevented compromises and collaboration. It shut down the federal government. It’s led to a number of bad hires and unnecessary stumbles. It’s prevented him from achieving an equally large number of easy policy wins that would have made him exceedingly popular with more than just his base. 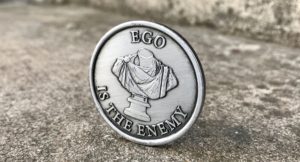 The same was true for Richard Nixon. Ego has been a nightmare for Elon Musk. For Kayne West. Ask Hillary Clinton about ego. Or what, just look at the title of the book she wrote after losing, What Happened. (Um, your ego cost you the election?) It should not be controversial then, to say that ego is the enemy.

In the recovery community, they like to say the E.G.O stands for “Edging God Out.” That makes sense. There’s no room for God in your life if you believe you’re the center of the universe. But I would argue that ego edges out a lot more than just a higher power…

Ego pushes away an accurate picture of risk or failure.

Ego pushes away understand and self-reflection.

Ego pushes away the desire to improve–the essence of mastery.

How can we make things for other people if all we’re thinking about is ourselves? How can we motivate or lead other people if we have no ability to care or see what is happening inside them? As the performance artist Marina Abramović put it, “If you start believing in your greatness, it is the death of your creativity.”

It might very well be the death of you…as many generals on the battlefield and athletes and addicts who plunged ahead despite all the warnings soon found out.

So what keeps ego around then? If it is so dangerous and deleterious to our self-interest? It’s simple: Comfort. Pursuing great work—whether it is in sports or art or business—is often terrifying. Ego soothes that fear. It’s a salve to that insecurity. Replacing the rational and aware parts of our psyche with bluster and self-absorption, ego tells us what we want to hear, when we want to hear it.

But it is a short-term fix with a long-term consequence.

So whatever you’re doing. Whether you’re young and brimming with ambition or you’ve made that first couple million, signed your first deal, been selected to some elite group, or you’re already accomplished enough to last a lifetime. Whether you’re stunned to find out how empty it is at the top or you’re charged with leading others through a crisis. Whether you just got fired or hit rock bottom, beware.

Wherever you are, whatever you’re doing, your worst enemy already lives inside you: your ego. “Not me,” you think. “No one would ever call me an egomaniac.” Ah, but there it is. That’s ego already! Like the devil, it’s trick is to convince you it doesn’t exist—that you don’t have one.

We must be on guard. We must be constantly pushing it away before it pushes our more cherished assets and insights away.

Ego is the enemy. 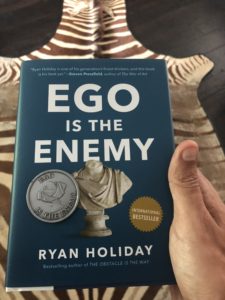 Ego Is The Enemy by Ryan Holiday is $.99 on Amazon right now for a very limited time. If you want to check it out, or give it as a gift, it’ll never be cheaper than that.