Is there a better example of The Narrative Fallacy (or, the Soundtrack Delusion or all the posts I’ve tried to write on this subject) than this photo? 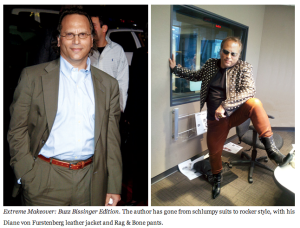 Read the article. Compare it to the photo.

That’s the difference between the grandiose story of self-deception we spin for ourselves and the sad, pathetic reality of what we really are.

Buzz Bissinger is an amazing writer. In many ways, his article is brave and honest and commendable. At the same time, it is the perfect embodiment of the delusional image we project in order to cover up our own fears and inadequacies.

Fortunately, there is an antidote for this. Documentary photographs like this work quite well. You’re not awesome, you’re not a rockstar. All eyes are not on you–at least not in a good way. You look like an idiot.

Just do yourself a favor and learn from examples like this, instead of by your own trial and error.

I never got a PhD or anything but from what I understand, the transaction goes like this: The school covers tuition of promising students and pays their living expenses in exchange for the student doing all the work the professors don’t want to do–research, grading papers, hosting study sessions.

But the real value for the student–which some fully take advantage of and some don’t–is in the fact that the professor gives them their own set of keys to the laboratory. Oh, and they’re allowed to trade on the prestigious name of the university and the professor’s reputation.

This transaction is not all that dissimilar to the one I made with Tucker at 19 years old, or the one I made with Robert Greene a little later. In some ways with American Apparel, too. They not only covered my education costs, but let me into their laboratory. And I got to explore all sorts of amazing opportunities merely by association with them. (Before this even, I met Tucker because I was writing for my college newspaper. The paper was paying me to go out and meet people who’d have never talked to me otherwise)

I’m realizing that identifying opportunities like this has been the secret to whatever success I’ve had so far. That is: identifying hidden subsidies. Finding someone or something that will cover the costs you otherwise would have (or perhaps, could not have) had to cover to yourself.

For instance, I’ve been doing some speaking lately. This is not something I had any experience or expertise in. In fact, I found it quite terrifying. I knew that getting good at it would require a fairly large investment on my part, both in time and in possibly hiring a coach.

Then, Creative Live (through my friend Chase Jarvis) asked if I would try out a marketing class to see if it worked on their platform. Doing 10 hours live on camera was not exactly my idea of a good time–but I noticed that subsidy again. Here, someone was offering to pay me to break myself of stage fright, to craft my message, to develop my materials and best of all, put me in front of a large audience. Of course, I said yes.

I think the same thing when journalism schools or universities ask me to come in for Q&As. These don’t usually pay, but the institution is offering me the opportunity to introduce my book to young audience and lending me their credibility as well. And I also get to test my material in a relatively safe and low key environment.

And now, as a result, an hour keynote (which does pay) is easy and painless for me. I had my education and development not only covered–in fact, at a profit–and now I’m booked with a bunch of cool talks this year.

It’s not always something you’re “asked” though. More often than not you need to seek it. Let’s say you see some client or would be client suffering from a problem. It might be something outside your current specialties or capabilities, but try offering to take a crack at it for way less than what someone else would charge (or for free if you must) Why? They’re paying you to learn how to do something you can then charge other people for.

Your education is covered. You’re learning in someone else’s laboratory–in a safe way. If and when you succeed, you can add that service to offering. I try to think about this when people approach me with products they want to market. Will this open up a new avenue for me?

Another example: No one asked me to put my Reading Newsletter together. But it works on the same logic. I realized I was already reading all these books, I figured there had to be a way to get it subsidized. Now, the email more than covers the books I buy each year (thousands of dollars worth a year). In fact, I actually have the Amazon Affiliate revenue just roll over into Amazon gift cards each month. It worked out quite nicely–oh, and it was also the single biggest driver of sales for Trust Me I’m Lying as well (In fact, two of my foreign rights deals came from editors who subscribe).

The way to think about it is like this: You’re already going to try to do things. That’s who you are. You’re not the type who sits idle. You’re curious, motivated and resourceful. Guess who else is interested in those traits? Basically every successful business, entrepreneur or institution. So find them and ask them to subside the cost. Let them think they are harnessing that energy exclusively for their advantage. Let them think they’re getting a deal. (This is the essence of Charlie Hoehn’s strategy)

Really though, you’re the one leaving on top. You’re getting an education. You’re developing a business on their time and on their dime. And you’re benefiting from their direction, connections and access the entire time.

For young people increasingly turning away from school, this is the path you’ve got to take. No one is going to take you by the hand and lead you. Subsides don’t fall in your lap. Find them, take full advantage of them, move on to the next. And then never ever forget to repay the people who helped you along the way.