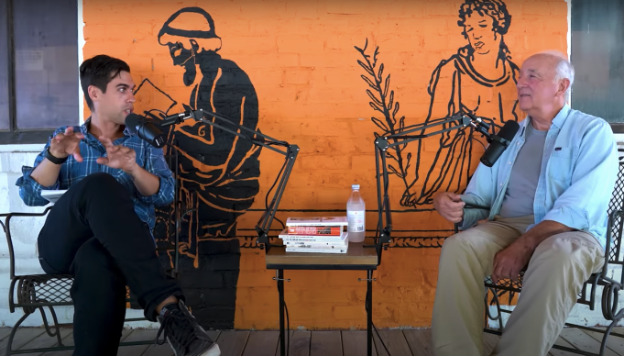 I’m not saying everyone should start a podcast. In fact, I have said the opposite many times. There are way too many of them out there…and most are not good.

I’m just saying that having a podcast is pretty magical because you get (for free) something that no amount of money in the world could buy: Access to some of the smartest and most interesting people in the world. ‘Picking someone’s brain’ is really a form of picking their pocket and yet with a podcast, you get to do that and usually the person says “Thank you so much for the opportunity” at the end.

Over the last several years, I’ve had the chance to spend more than a few hundred hours interviewing people for the Daily Stoic podcast (which you can subscribe to here and here). And with over 100 million downloads of Daily Stoic’s episodes so far, the people I’ve gotten access to have been beyond my dreams. I am certainly better, smarter and wiser for the privilege.

In today’s email, I wanted to share some of the absolute best things that I’ve learned in that time.

— Les Snead, the general manager of the Los Angeles Rams, told me that inside the Rams organization they talk about having “panic rules.” What do you do when everything gets mixed up, when the coverage is confusing, when the play breaks down and there’s havoc on the field? How do you respond when the play clock is running down and the play call hasn’t come in yet because the headsets aren’t working? “When there’s chaos and your brain is panicking,” Snead said, “go to your panic rules. Slow down and go to your panic rules.” This isn’t just an on-field thing. For the chaos of life, we all need panic rules. Otherwise, you’re liable to make panicked decisions. You’re liable to do something emotional, something short term, something that violates your principles and hurts your cause.

— The Olympic mountain biker Kate Courtney told me a piece of advice she received from her coach when she was pushing herself too hard in practice. “Do you want to be fast now,” her coach asked, “or later?” Meaning, do you want to win this workout or win the race? In Discipline is Destiny, when I say that self-discipline saves us, part of what it saves us from is ourselves. When we are committed, when we are driven, self-discipline isn’t always about getting up and getting to work. It’s easier to workout than to skip a workout, easier to write than relax. The problem with that is that if you want to last, you have to be able to rest.

— Here’s another from Les Snead where he told me his strategy for ignoring the constant criticism from Monday morning quarterbacks and living room GMs. “I intentionally practice Stoicism enough to know, ‘Okay, this comment or this tweet or this simple take shouldn’t disrupt or even ruffle my emotions.’” Les said. When you know what you’re doing, he explained, you have to let your competence double as armor against criticism and complaints. It’s not that he’s egotistical—it’s that he knows his decisions were well thought out by him and his team.

— Matthew McConaughey told me he shut down his production company and his music label because “I was making B’s in five things. I want to make A’s in three things.” Those three things: his family, his foundation, his acting career. Marcus Aurelius would say that doing less “brings a double satisfaction.” You figure out what’s really essential and you do those things better.

— Along the same lines, Maya Smart told me about how she had to start saying “No” so she could say “Yes” to writing her first book (which you can pick up at the Painted Porch Bookshop). “I had to start setting boundaries,” she said “Steven Pressfield writes about this idea that you do this shadow work. For me, it was volunteering…So I started resigning from boards and telling people, ‘I’m no longer able to do this thing that I used to do because I’m focused on this book.’”

— Speaking of Pressfield, the distinction between amateur and professional is an essential piece of advice I have gotten, first from Steven’s writings and then by getting to talk to him over the years (here, here, and here). There are professional habits and amateur ones. Which are you practicing? Is this a pro or an amateur move? Ask yourself that. Constantly.

— Somewhat related, the NASCAR driver and student of Stoicism, Brad Keselowski, talked about what distinguishes a professional in his field (and it applies to most fields). “If the conditions were always perfect, the average 12-year-old could do my job,” Brad said. “The problem is that those days are very seldom.” Can you still show up and perform when the conditions aren’t perfect? That’s the question.

— I talked to one of my favorite writers, Rich Cohen, about the many lessons he learned from his father (who is the subject of Rich’s latest, The Adventures of Herbie Cohen: World’s Greatest Negotiator), including: “One of my father’s big things is that the key to success is to care, but not that much. To remain detached. To look at this situation you’re so worried about and say, ‘it’s merely a blip on the radar screen of eternity.’”

— After a billionaire-backed lawsuit put him $200 million in debt (which you can read about in my book Conspiracy), AJ Daulerio was finally driven into drug and alcohol recovery. He told me about how critical it’s been for him to have “emergency routines” that he can rely on when, to borrow Marcus Aurelius’s phrase, he is “jarred, unavoidably, by circumstances.” Whether it’s waking up to bad news, getting hit with a sudden craving, or being sent into a downward spiral by some painful memory flooding back—he has routines that bring him back to center and keep him from giving back all the progress he has made. He gets to a recovery meeting. He picks up his journal. He spends a few minutes meditating. He calls someone else and helps them. As with Les Snead’s panic rules, what you choose doesn’t matter as much as that you choose.

— Another from McConaughey. He told me he’s known in Hollywood as “a quick no and a long yes.” What a great expression! Before he says yes to doing a movie, he sleeps on it for ten days to two weeks in the frame of mind that he’s not going to do it. If he sleeps well, he doesn’t do it. If the thought that he has to do it wakes him up at night, he does it.

— I told Dr. Edith Eger I felt guilty about someone I had lost touch with and only recently reconnected with. She cut me off and told me she could give me a gift that would solve that guilt right now. “I give you a sentence,” she said, “One sentence—if I knew then what I know now, I would have done things differently.” That’s the end of that, she said. “Guilt is in the past, and the one thing you cannot change is the past.”

— When I talked to Dr. Sue Johnson, she talked about how when couples or people fight, they’re not really fighting, they’re just doing a dance, usually a dance about attachment. The dance is the problem—you go this way, I go that way, you reach out, I pull away, I reach out, you pull away—not the couple, not either one of the people. This externalization has been very helpful.

— George Raveling told me that he sees reading as a moral imperative. “People died,” he said, speaking of slaves, soldiers and civil rights activists, “so I could have the ability to read.” He also pointed out that there’s a reason people have fought so hard over the centuries to keep books from certain groups of people. I’ve always thought reading was important, but I never thought about it like that. If you’re not reading, if books aren’t playing a major role in your life, you are betraying that legacy.

— Tim Ferriss advised stripping these three words out of your vocabulary: it’s not fair. Because they are impotent and meaningless. Because they don’t do anything but make you upset.

— “Sometimes,” the professional baseball player Ryan Lavarnway told me, “you just have to say, ‘good swing, bad aim.’” Sometimes you put a great swing on a pitch but hit the ball right to a fielder. Great effort, bad result. So it goes in life. Try to think less about results. Just try to make contact with the ball, just try to give your best. If you do, that’s a win, regardless of whether it’s a home run or an out.

— I asked Matt Quinn, the frontman of indie rock band Mt. Joy, about Mt. Joy’s rise and how the band has navigated success. “It’s helpful to tether to controlling what you can control,” he said. “That’s the thing we think about all the time. We’ve put in a lot of hard work. And if we just keep doing that—if we just keep getting better and practicing our instruments and doing the controllable things—then the outcome will at least not be a failure. I believe that for us. That’s really kind of been our motto.”

— When I interviewed Dr. Lisa Barrett for the Daily Stoic Leadership Challenge, she had a great question to ask whenever you have an emotional reaction to something that happens, “Is this the only story?” Is this the only interpretation that fits here? No? What are my other options? What are some other stories I could make up about what happened here?

— James Clear, author of the wonderful bestseller Atomic Habits, told me he carves out “two sacred hours” in the morning to do his writing. “I fit it in,” he said, “before everybody else’s agenda creeps into my agenda.”

— Ron Lieber—the longtime “Your Money” columnist for The New York Times and author of The Opposite of Spoiled: Raising Kids Who Are Grounded, Generous, and Smart About Money (one of my all-time favorite titles)—told me a story about a time his three-year-old daughter asked, “Daddy, why don’t we have a summer house?” He said that she clearly had been pondering the question for some time, that she clearly had an interest in where her family stood in relation to other families, and that she clearly had a hunch that her family could have a summer house but made a decision to not have a summer house. It struck Lieber in that moment: how you spend money is a signal of what you value. “Our choices, not just our words, but our choices have meaning. They are modeling something. They model a certain form of trade-off.”

— Randall Stutman, leadership coach to some of Wall Street’s biggest CEOs, told me his teenage kids taught him an important lesson about power. You gotta figure out how to get people to think it’s their idea to do what you want them to do. “You gotta give up power to keep power,” he said. “You gotta give up power to maintain power.” One of the interesting things about power is that the harder you try to hold on to power, the less of it you actually have.

Thanks for reading these 20 lessons from the hundreds I’ve learned on the Daily Stoic podcast. Remember you can find the full archive at DailyStoic.com/podcast and subscribe to upcoming episodes here and here. 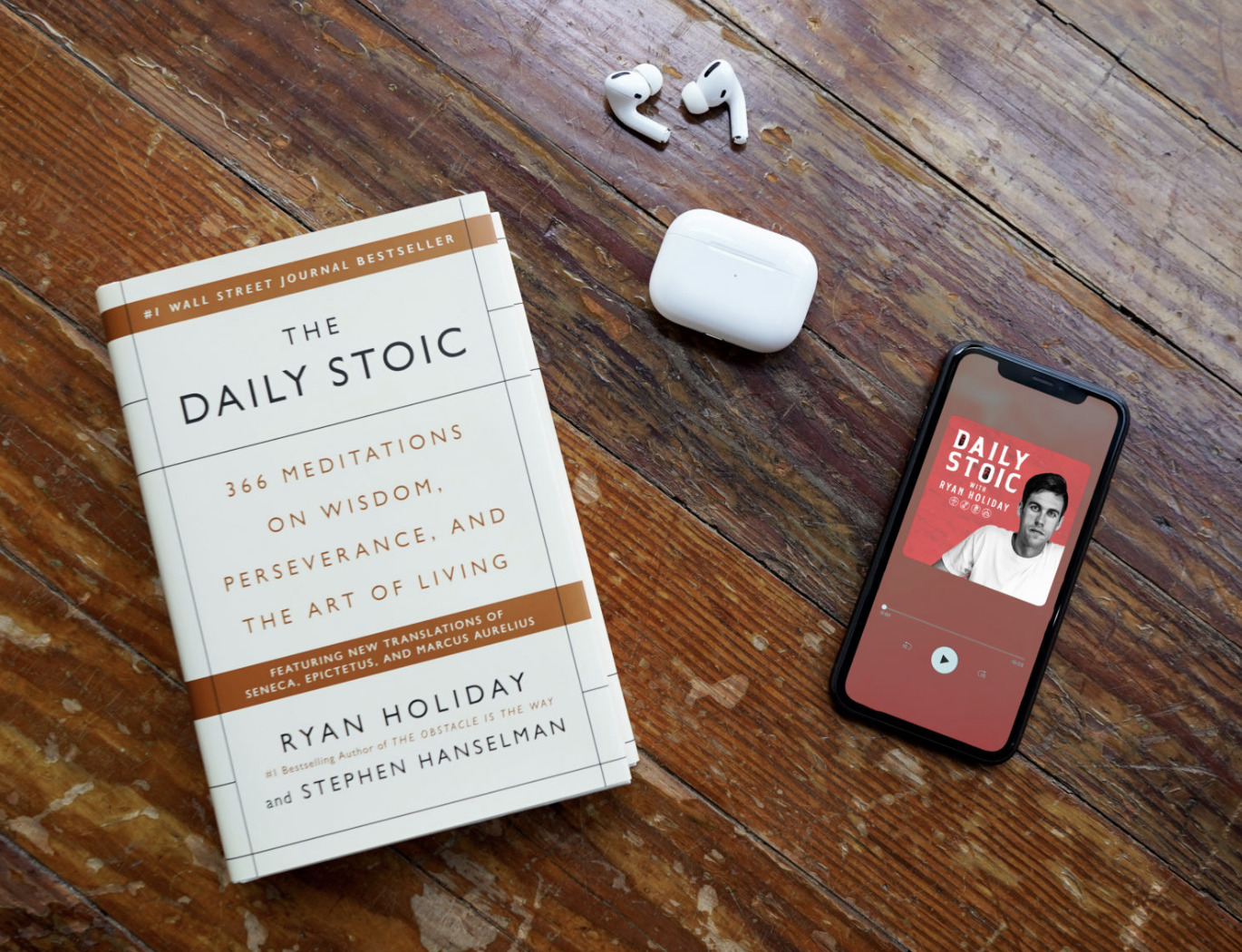 Next post »
If You Only Read A Few Books In 2023, Read These
Go to mobile version