Why I Pick up Trash at the Beach 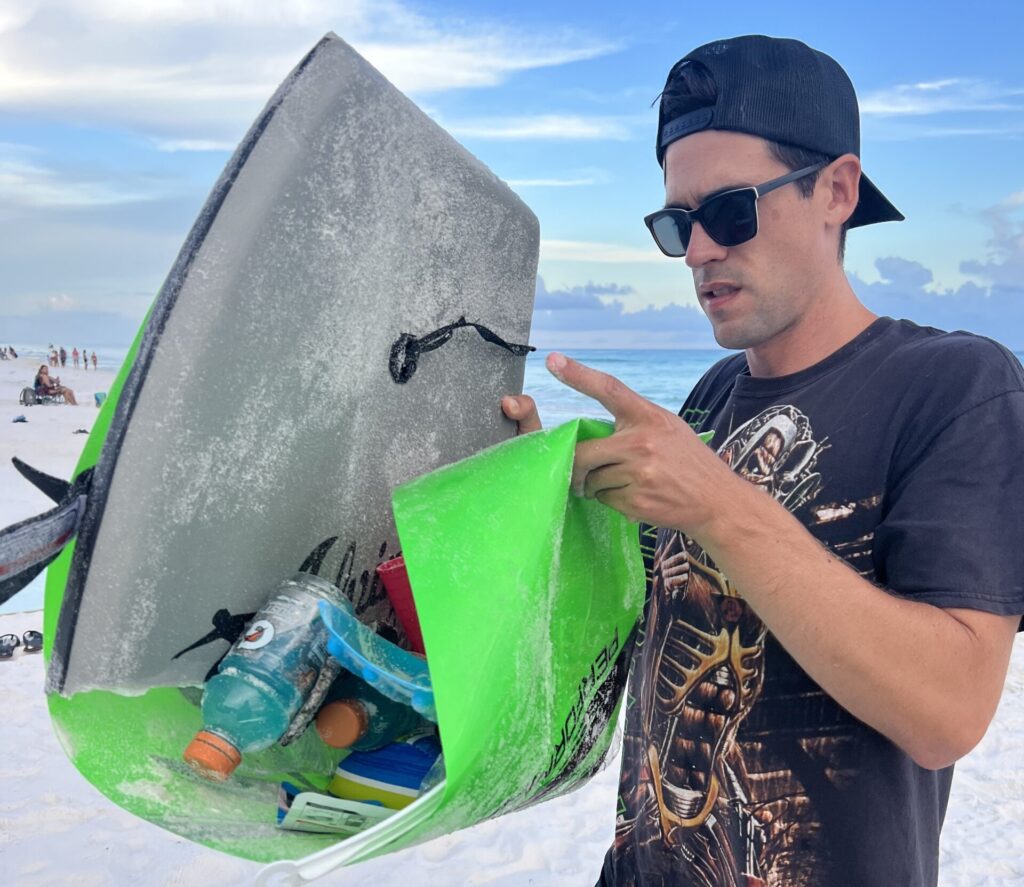 I have lived on a rural country road for many years.

It is unpaved and unmaintained by the county or the state, lined with trees, and more frequently crossed by deer and jack rabbits than people.

It’s a throwback to an older, simpler way of life.

It’s also a throwback to a scene I’ve always remembered from Mad Men, where Don Draper and his family finish their picnic and then nonchalantly throw all their trash into the grass below.

My experience walking and running and biking and driving on this road has been to witness the return of that attitude. People dump tires and old mattresses. They dump debris from construction sites. They dump beer bottles and candy wrappers. They dump illegal deer kills and for some inexplicable and alarming reason, a lot of dead dogs.

At first, this just pissed me off—especially because the nails kept giving me flats. It made me angry at humanity and the place that I lived. I tried calling the police and animal control and my local politicians—of course, they did nothing. I put up cameras which did nothing. I despaired about the climate and the future. I thought about moving.

But then one morning on my walk with my kids, a thought hit me that was both freeing and indicting. How many times do I have to walk past this litter, I thought, before I am complicit in its existence. Even if I moved to a place where this didn’t happen, I thought, it would still be happening here. Marcus Aurelius was right when he said that you can also commit injustice by doing nothing.

So I started cleaning it up. The tires went into the back of my truck—and I paid to have them properly recycled. I was down in the gullies by the side of the road picking up soda bottles and plastic bags. I tossed countless nails and screws into the trash. I have put on face masks and gloves and scooped up dead goats, a dead calf and dead dogs which I burned or took to the back of my ranch to decompose in a less disruptive place.

I can’t say the experience was pleasurable, but it was empowering.

The Stoics would agree that the world can be ugly and awful and disappointing. They would just remind us that what we control is what we do about this. We control what difference we try to make. We control whether it makes us bitter or makes us better—whether we complain or just get to work.

But the ultimate reward came more recently, because we spent the last few weeks at the beach as a family. My kids were excited to play in the ocean and to build sand castles and have ice cream, of course. Yet they seemed to have the most fun running up and down the empty beach in the morning—unprompted by me—picking up trash left by the beach goers the day before and asking for my help lifting them up so they could put it in those paper bag trash cans that the county puts up every few hundred yards.

I posted about it on Instagram once and people showed me there was a whole hashtag of people doing this. It started with a viral Facebook post in 2019, which has 335,000 shares and 102,000 likes (and counting). A guy posted before and after photos with this caption:

“Here is a new #challenge for all you bored teens. Take a photo of an area that needs some cleaning or maintenance, then take a photo after you have done something about it, and post it.”

The challenge spread globally thanks to the #TrashTag hashtag. You can see people cleaning up a beach in Mumbai, filling up dumpsters full of trash in Kansas City, and collecting garbage in Vietnam.

A Daily Stoic reader emailed me a little while back to tell me about how his picking up trash spread locally. In his townhome community, there’s a trash dumping problem. “It was driving me mad,” he wrote. He put up cameras to try to catch offenders. He stayed up late to see if he could run them off. Then he came across the video I made and instead of policing his area, he began cleaning it up. “I saw it rub off on some of my neighbors and family,” he said. And now, the number of neighbors picking up trash outnumbers the number of neighbors dumping trash.

The Stoics spoke of our “circles of concern.” Our first concern, they said, is our mind. But beyond this is our concern for our bodies then for our immediate family then our extended family. Like concentric rings, these circles were followed by our concern for our community, our city, our country, our empire, our world.

The work of philosophy, the Stoics said, was to draw this outer concern inward, to learn how to care as much as possible for as many people as possible, to do as much good for them as possible.

There’s a sign by the track I run at in Austin, put there by the football player Hollywood Henderson (who paid for the track). It says, “Leave This Place Better Than You Found It.”

There is a Mr. Rogers quote I love. “When I was a boy and I would see scary things in the news,” Rogers said, “my mother would say to me, ‘Look for the helpers. You will always find people who are helping.’”

We decide what we look for in life—do we get mad at the people making the mess or do we look towards the people cleaning things up? We decide whether to despair or find hope and goodness.

That’s what makes the difference…and life better for everyone, but especially you.