The Obstacle Is The Way: Tim Ferriss Audio Edition 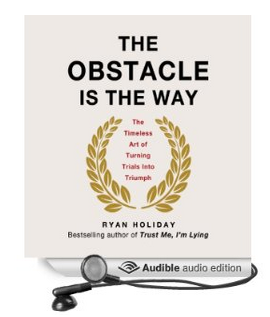 “Over the last 14 days, I have carried one book in my backpack to cope, all day and every day: The Obstacle Is The Way.” — Tim Ferriss

For the many of you who asked, I can now proudly announce that the audiobook edition of The Obstacle Is The Way is now available. And there’s an exciting piece of news about it that I’ve kept secret until now: Tim Ferriss is publishing it.

Tim and I spent some time in Amsterdam in 2013 when I was finishing the book and I showed him a copy of the manuscript. He liked it so much that he went straight to my publisher, Portfolio/Penguin and bought the rights for the audio edition. This was an ideal collaboration because not only did Tim give excellent notes on the book that helped improve it, but his massive distribution network helps put the book in front of lots of new people. As his May selection for the Tim Ferriss Book Club, The Obstacle Is The Way will get all sorts of new readers I could have never expected otherwise.

It’s all very fitting because Tim and I first connected over our love of Seneca back in 2007. Tim was the one who prompted me to write this post on stoicism for his blog in 2009, which resulted in my first inquiry from a book publisher. It was then that I realized I might be able to actually pursue this all as a career. And now here we are publishing a book together.

Anyway, enjoy. You can also listen to this podcast that Tim and I did about the book (which tied with James Altucher’s podcast was one of the most fun and thought provoking interviews I have ever done).

You can also purchase the The Obstacle Is The Way audiobook here:

A Burglar Stole My Engagement Ring—And It Made My Proposal

Note: The events in this post occurred in February 2014. The original column ran in the New York Observer.

About seven years ago I met a girl. It was at a college party–a “kickback” if I recall the distinction made by the host at the time. She was tall, she was blond, she had short hair. She was sitting in a cardboard box for some reason. Her name was Samantha.

We were essentially children, then, but over these intervening years became adults together. From 19 to 26 she walked me through dropping out of college, being embarrassed, moving across the country, writing books, having breakdowns. She was the long-suffering girlfriend, content with meager indulgences: a puppy and that pink bike I got her after my first five-figure check at 20 and later, a goat.

But eventually, I got it together. Or so I thought: I bought us a house. I bought her a ring. I even bought myself a safe to put the ring and all the other adult things in. I did everything I was supposed to.

Deciding to ask Sam to marry me was a process many years in the making, one that, honestly, I didn’t totally understand but knew was time for me to get on with. I found what I thought was the perfect ring while in New York on business: a 115-year-old Victorian piece that I put a better diamond in. I planned to propose during an upcoming vacation in Hawaii. I was pretty damn proud of myself.

I put that little ring in that little safe and forgot about it. In California for a few days, starting to recover from what was already shaping up to be a terrible week, Samantha took a phone call: Your house has been broken into. Everything was stolen. Everything ransacked and destroyed. That safe? Yeah it was broken into as well–busted completely open and cleaned out.

The horribleness of it all came together for me as we huddled next to each other outside a restaurant, 2000 miles from home, her on the phone with the police relaying me questions. What did you have here? Who do you think could have done this? Where there any valuables in the safe we should know about?

She could see the answer in my eyes the second she passed along their question. She’d probably already had some idea and now the suspension of disbelief was no longer possible. But we kept up the external charade anyway–it was too much to talk about. She handed me the phone and I handled it with the cops. They’d left the box, but the ring was gone. Gone before I could give it to her.

So much for being an adult. So much for those best laid plans. For the illusion of having a handle on my life.

I’m sure a lot of guys have had to awkwardly return to the jewelry store where they bought their engagement rings. Some guys dejectedly inquiring about return policies. Others dragged in by the ear by a dissatisfied gold digger. Me? I had to walk in and say: “Umm…I’m going to need another one.”

Shopping for your first engagement ring is exciting, because you can do no wrong. That’s the beauty of an engagement ring. She’s going to like it. It’s part of the unwritten contract. Boy buys ring, girl melts when she see’s it–even if it’s hideous or way too small.

Round II is a little different. I may have been loaded with insurance money but the giddy confidence was gone. I may be able to gamble thousands of dollars on a surprise once, but in the cold light of morning, I couldn’t do it again.

It was one of the moments where you feel very much like a teenager in over his head, where you’d usually call someone else older and more responsible than you to help get you out of the mess you’d created. I’m sure this bled through in all my interactions with the police, with the insurance companies, with the jeweler: just tell me what to do here. This shouldn’t be my problem. What about my perfect plans? I can’t deal with this. But of course, none of that matters.

One of the ironies of being with someone you really love for a long time is becoming completely incapable of handling stressful or difficult things by yourself. Make a big decision and not tell them about it? That defeats the whole point of the relationship. It’s just not done.

I broke down and told her, though she’d clearly deduced it already. I showed her the ring I’d bought and she cried. It was exactly what she wanted, yet by definition irreplaceable. So we looked at rings together, over the phone. Thank God, because everything else I thought she’d like she didn’t. My first guess had been right–but now it was clear that it had been beginner’s luck.

Sam didn’t say it expressly but I knew how unfair this all was. The thieves had stolen something she could never get back. Something that after several years in a rather untraditional, basically common-law relationship endured with total patience and selflessness, to which she was more than entitled. Not the ring, the moment.

The fact that everyone says, “Oh, but this will make for such a great story” wasn’t any comfort. I owed it to her to make it better. I needed her help to get through it myself, but I couldn’t let that deprive her of something she deserved. I didn’t understand that before, I didn’t get what this whole thing was about. I’ll be honest: it was a box I was checking, an item on a to do list.

The impediment to action advances action, Marcus Aurelius once wrote. This was not how I had originally intended it to be. That original plan was interrupted. But as it is often is, what came of it was so much better.

I bought the ring I knew she liked but was too shy to demand, but I said nothing, I said we’d find something later. They’d had it at the place the first time, but I’d ignored it because it wasn’t my taste. White gold, 1920’s vintage Art Deco, with blue sapphires around the diamond. I had to dodge questions for the next month or so. I had to politely discourage her “research”–just in case she found something else.

Would you believe I refused to put it in the new safe? I hid it instead, in a hollowed out book. I waited, again, but this time for the moment, not some arbitrary plan. Last week, we went to the Hamilton Pools in Texas, undoubtedly one of the wonders of the world. It’s an enormous natural stone grotto–seen in countless Pinterest slideshows but assumed to be some exotic locale.

For a twenty minute window there wasn’t a soul in the place and I asked. Total surprise. And she said yes for real and that was that. Even better than whatever half-thought gesture I would have tried to pull off had everything gone as planned.

You do certain things and check certain boxes and think you’ve got it. But of course you don’t–you don’t have a clue. You never do, not until after. Not until the shit that happens in life teaches you.

This column originally ran in the New York Observer. Comments can be see there.

The Obstacle Is The Way: 10 Strategies For Turning Obstacles Into Opportunities from Ryan Holiday
May 5, 2014by Ryan Holiday
Blog

Welcome To The Obstacle Is The Way: The Timeless Art of Turning Trials into Triumph

The day has come. The Obstacle Is The Way: The Timeless Art of Turning Trials into Triumph is now out. I’ve written a ton of pieces about the book, I produced content and images to support the book and of course, there is already all sorts of press about the book. I want to use this post (which will be updated for the next couple weeks) as an archive of all of that—or as a place to get started if you’re new to me and my work.

5/21: The School of Life Workshop London

Articles I’ve Written For The Obstacle Is The Way:

Copyblogger: How I Wrote Three Books In Three Years

FastCompany: 7 Ways To Turn Your Opponents Into Opportunities

Art of Manliness: Finding the Opportunity Inside the Obstacle

Entrepreneur.com: Turning Crisis Into Opportunity: 5 Ways To Deal With Hardship

800-CEO-READ: The 3 Stoic Disciplines: How to Turn Your Obstacles Into Triumphs

Thought Catalog: Should I Drop Out of College?

RyanHoliday.net: A Lesson From The World’s Worst Week

Beliefnet.com: Nine Ways To Turn Your Obstacles Into An Advantage

Art of Manliness: The Obstacle Is The Way with Ryan Holiday

Lewis Howes School of Greatness: The Philosophical Guide to Turning Trials Into Triumphs with Ryan Holiday

Art of Charm: The Obstacle Is The Way

Bitehype.com: A conversation about obstacles and old books with Ryan Holiday

Intrepid Radio: The Obstacle Is The Way

The New Man: Ryan Holiday – The Obstacle Is The Way

Evidence Magazine: The Obstacle is the Way: A Timeless System for Transforming Challenges into Opportunities

The Phat Startup: How To Destroy Any Obstacle – Ryan Holiday Interview

Yo Pro Wealth: Create Your Future, Do What You Love – Ryan Holiday

Press About The Book:

Bittorrent: Every Obstacle Is Also An Opportunity

London Evening Standard: How to avoid a work crisis with a ‘pre-mortem’

Huffington Post: 10 Reasons to Love the Obstacles in Your Life

Linked In: Do Bad Odds Help Us Perform Better?

Farnum Street: The Obstacle Is The Way — Turning Adversity Into Advantage

Small Business Trends: “The Obstacle Is The Way” Gives Unusual Advice for Success

Stoicism Today: “The Obstacle Is The Way” by Ryan Holiday

Medium: Resilience — The Obstacle is the Way

Uncollege: Review: “The Obstacle is the Way,” By Ryan Holiday